A visit to the Jurassic Forest.

The University of Alberta has a pretty active Palaeontological Society with undergrad, grad student, and faculty members, and when we can we try to organize palaeo-themed field trips. Lucky for us, this summer Edmonton had a very cool new dinosaur attraction open called the Jurassic Forest, so of course we had to check it out. 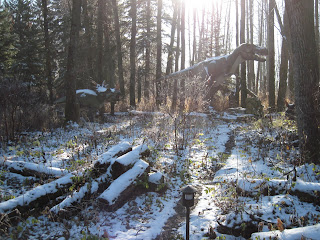 I should probably point out that winter arrives early in Edmonton...we had our first snowfall earlier this week.


One of the nicest things about the Jurassic Forest is that the animatronic dinosaurs are presented in what is probably close to their ‘natural’ habitat. Many of them are partially obscured by the trees and the effect can be quite convincing as you come up on these little vignettes. Here an Albertosaurus charges a herd of Styracosaurus, who wave their frills and roar. 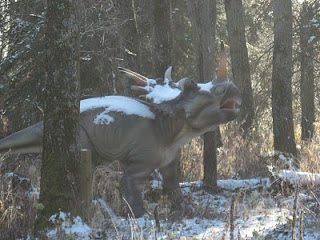 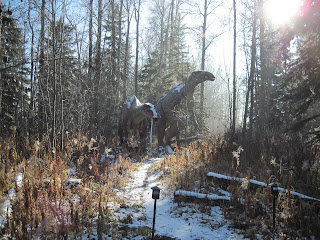 One of the favourites was the pair of Edmontosaurus. I think it was the combination of the position in the forest, the lighting, and the fairly anatomically correct animatronics – all the details added up to really transport you back in time. Plus, Edmontosaurus may even have seen the occasional weather like this... 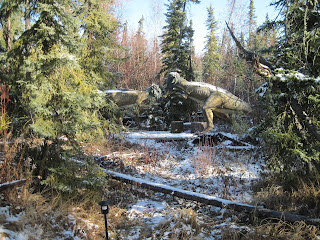 Another favourite was the duelling Pachycephalosaurus!


Most of the animatronics were pretty good, and Scott and I are pretty sure they are done by the same company that did the ones we saw at Dino Dino Dream Park back in Beijing this summer. The only ones I was really disappointed with were the Pteranodon, which were standing on their back legs, leaning forward, wings spread and ‘flapping’. Why won’t people show quadrupedal pterosaurs? They would still look cool! 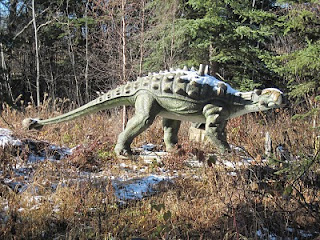 I was also pleased to see two ankylosaurs make an appearance! Although both were labelled “Ankylosaurus”, they were clearly modeled off the British Museum’s Euoplocephalus specimen, but that’s ok. They were trying. 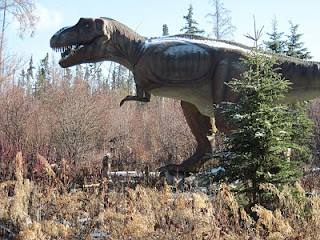 Tyrannosaurus closes the show at the end of the trails, of course. Somewhat bizarrely, he is roaring while eating a baby Corythosaurus and stepping on another somewhat indeterminate hadrosaur.

The Jurassic Forest also has a playground and sand pit for digging up fossils, and a multi-purpose educational room. I hear that their first summer of operation went pretty well, and I’m glad – the experience is pretty fun, and although Alberta has a lot of dinosaur attractions, we didn’t really have anything near Edmonton besides a small display at the Royal Alberta Museum. Some of the models are a little off, and there isn’t a whole lot of coherency to what dinosaurs appear in which order. But the placement of the dinosaurs in the forest is really great, there’s lots of signage about the science of palaeontology, and I think that with a tour guide for a school group this would be an excellent educational resource. Hopefully I’ll have a chance to go back in the spring or summer when it’s a bit greener! 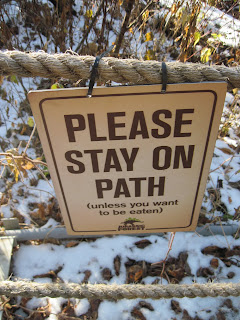