Kulindadromeus, a little ornithischian from the Jurassic of Siberia, has the palaeosphere abuzz with talk of fluff, feathers, scales, and all kinds of interesting integumentary goodness. Kulindadromeus has scales on its feet, hands, and tail, but the head, body, and upper limbs are covered in three different kinds of filamentous integument. 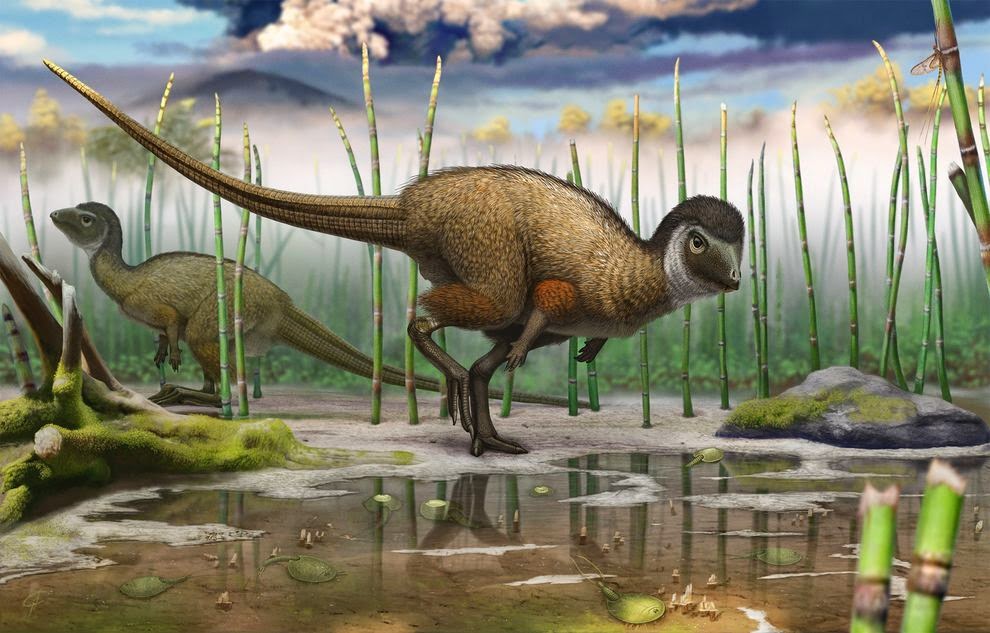 Beautiful restoration of Kulindadromeus by Andrey Atuchin, via National Geographic.

Feathers and fluff are extensively known in coelurosaurian theropods (and possibly other theropods as well), but are more controversial in ornithischians. Bristle- or quill-like structures are known in the little ceratopsian Psittacosaurus, and in the 'heterodontosaur' Tianyulong, but since these structures are so different than the filaments and feathers of theropods, there's been some debate about whether or not they evolved independently of true feathers. 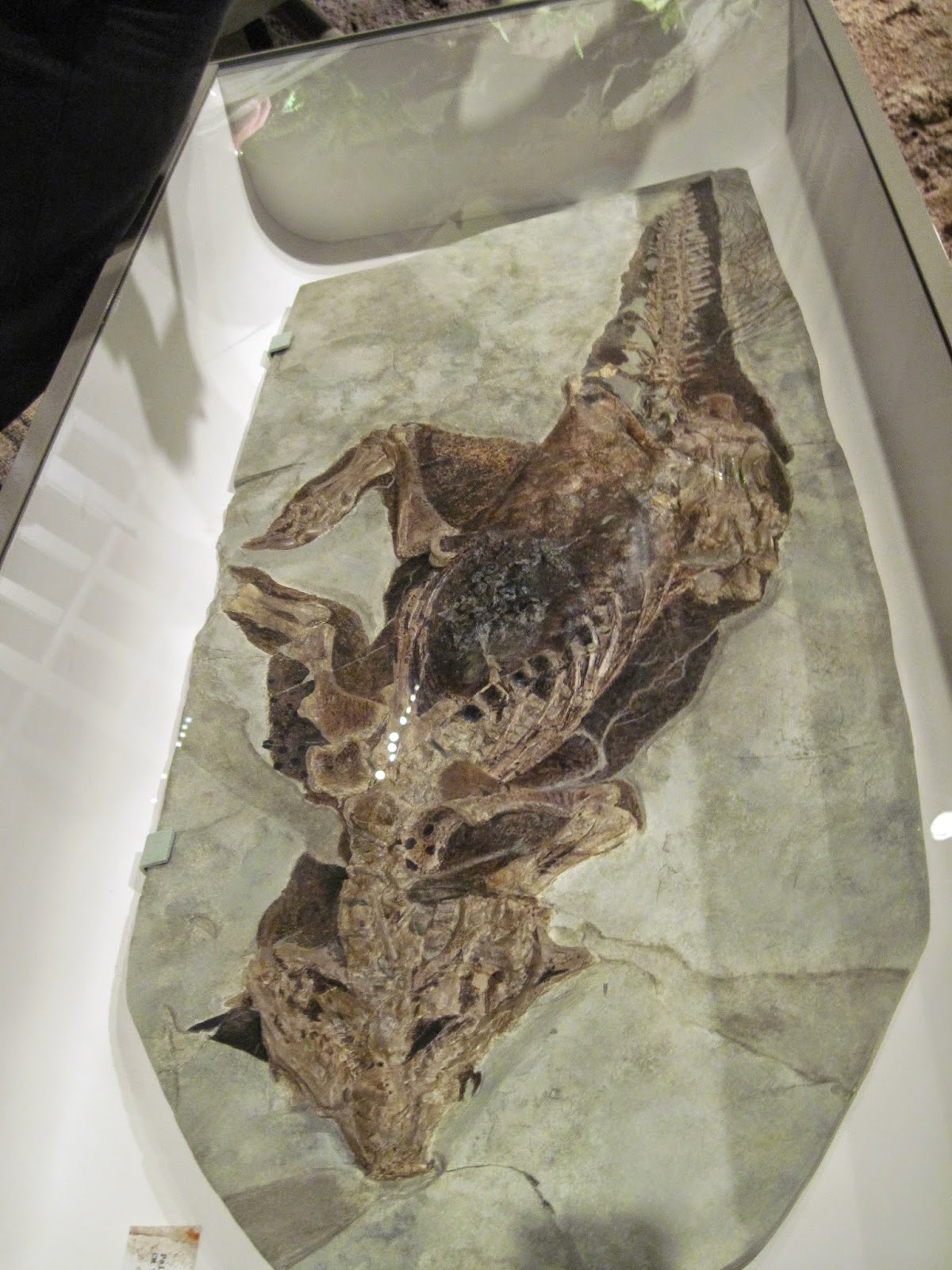 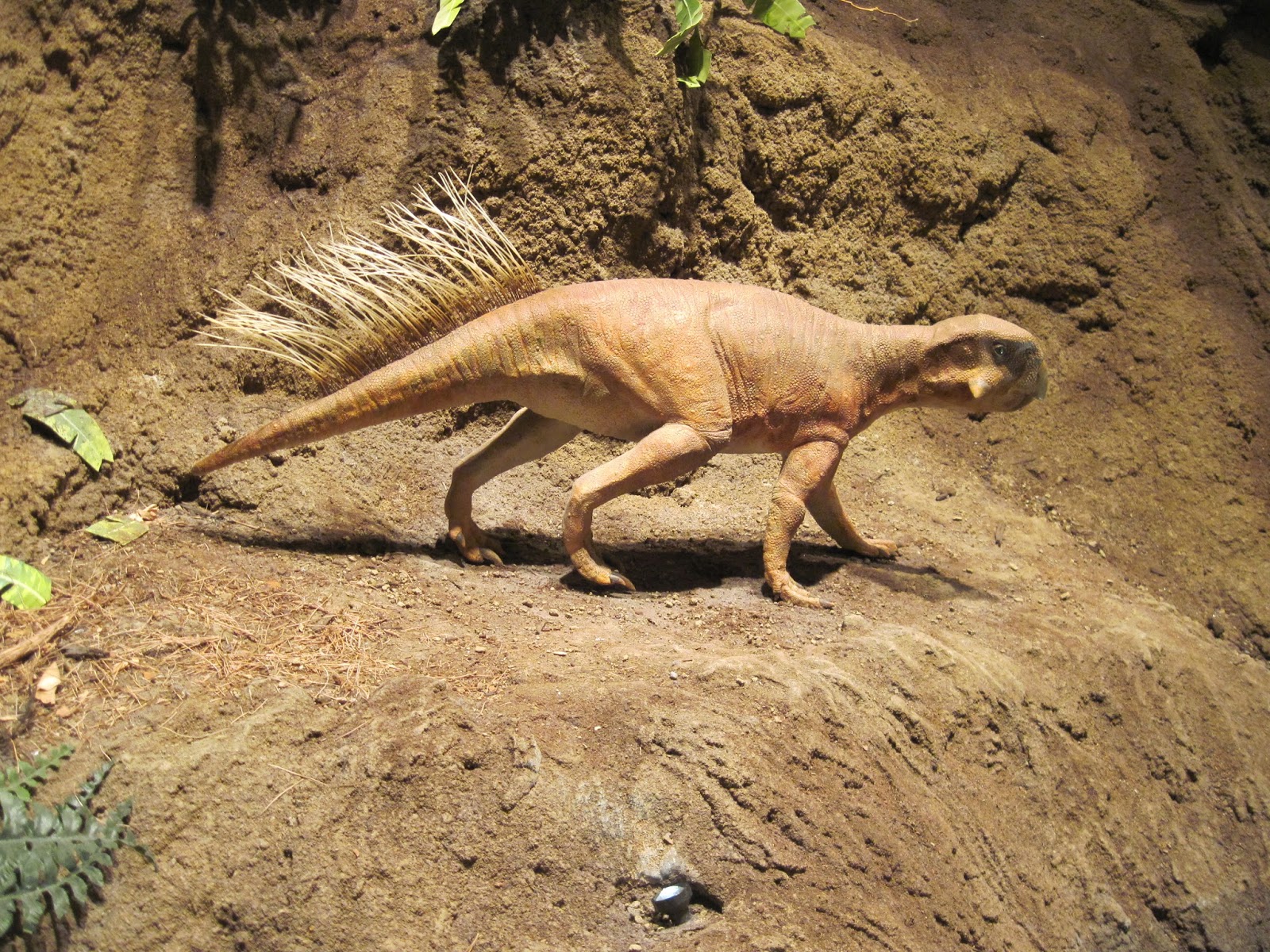 A not-so-great photo of a cast of the quilled Psittacosaurus specimen at the Carnegie Museum (look towards the top of the photo for the long, thin filaments), and a life restoration in the museum as well.


In Kulindadromeus, the torso and head are adorned with simple filaments that are thinner than the quill-like bristles in Psittacosaurus and Tianyulong. There are tufted plumes, where multiple filaments converge to a scale-like base, on the upper arm and upper leg. Finally, there are some ribbon-like clusters of filaments on the shins. The tufted plumes still aren't really like anything in the theropods, but the fact that they are branching filaments certainly suggests these are more feather-like than the quills of other ornithischians.

Besides its amazing fluff, Kulindadromeus is pretty neat for a couple of other reasons: 1) we don't really have a lot of dinosaurs from Siberia, so anything new from this region is cool!, and 2) basal things are always interesting, and 3) its non-feathery integument is super interesting! Kulindadromeus is a little more derived than Agilisaurus or Stormbergia, but is still in a relatively basal position in Neornithischia, the clade of ornithischian dinosaurs that includes everything except thyreophorans (ankylosaurs and stegosaurs), 'heterodontosaurs' like Heterodontosaurus, Fruitadens, and Tianyulong, and the most basal ornithischians like Pisanosaurus. The scales on its tail remind me of aetosaur osteoderms, but lack any bone and so aren't osteoderms, but true epidermal structures.

Anyway, I've been thinking about dinosaur skin a lot lately, having written papers on ankylosaur scale pattern diversity and soft-tissue crests in Edmontosaurus. In particular, I'm intrigued by the idea of scaly and fluffy ornithischians. We know that hadrosaurs and ankylosaurs had scaly skin, but does that preclude having fluff too? Well, Kulindadromeus shows you can totally have skin and fluff in different regions of the body. On the other hand, lots of large mammals today lack hair over most of their body, so large dinosaurs may have done the same.

Most of the ankylosaur skin impressions I know of come from Alberta, where the conditions are not ideal for preserving feathers and fluff. However, it's not impossible – feathers have been reported from ornithomimids from Alberta, so maybe we just need to look more carefully in the future. I think the idea of a fluffy ankylosaur probably seems preposterous – how could such an armoured, osteodermy animal have filaments in addition to its tough scales? And it's true – most animals today with osteoderms, like crocodiles, turtles, and lizards, don't have fluff. But there's one group of animals around today that very definitely have osteoderms and fluff: 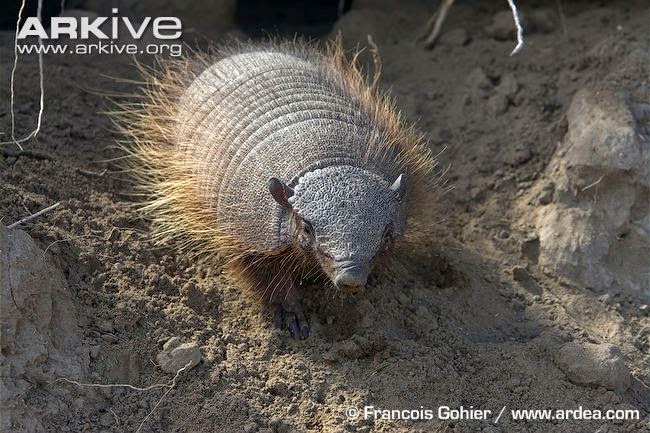 Here's the big hairy armadillo, Chaetophractus villosus. It's one of the fuzziest of the armadillos, with lots of coarse hair on its belly, but also hairs growing off of the individual scutes (if I understand correctly). I'm not going to argue that ankylosaurs definitely had this kind of morphology – armadillos, being mammals, have totally different osteoderms than ankylosaurs that evolved on their own independent evolutionary pathway, and mammal hair/skin and ankylosaur skin are very different. Additionally, we now have evidence for branching filamentous structures as far back as Neornithischia, but ankylosaurs lie outside of that clade (Tianyulong, with its quills, is more basal than ankylosaurs). But being an armoured, osteodermy animal does not always rule out also being a gross hairy thing. Because seriously, look at that guy.

So here, have a big hairy Pseudoplocephalus. He's not so bad, is he? 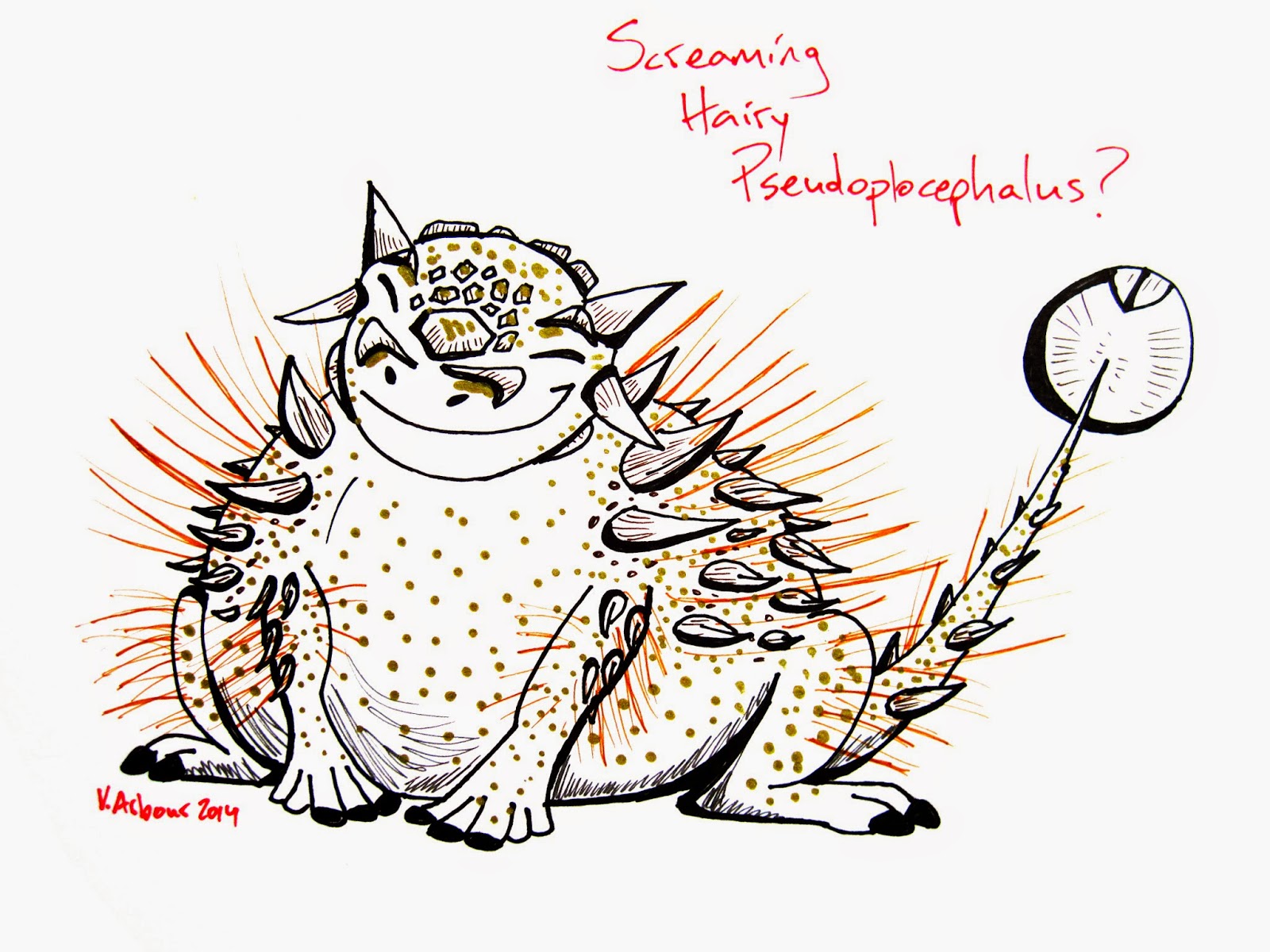 Or better yet, make it a screaming hairy Pseudoplocephalus, like Chaetophractus vellerosus.


Papers! (And if anyone has any literature on big hairy armadillos, please send it my way!)

Posted by Victoria at 8:56 PM 4 comments: Links to this post