It's hard for me to even believe this, but I've been writing Pseudoplocephalus for over 5 years now. I'd been an avid reader of many science blogs for a couple of years before I decided I wanted to try it out myself, and I decided to jump in finally because I was going to be spending three and a half months working and traveling around Korea, China and Mongolia back in 2010 on an NSERC-funded study abroad kind of thing. I figured that blog updates would be the best way to show what I was doing to friends and family, and if I liked it, I'd maybe keep writing about my research afterwards.

As I started writing here, I decided pretty quickly that I wanted to use Pseudoplocephalus as a science outreach tool (as opposed to keeping a grad school diary for my own benefits, etc.). At this point, my general goals with the blog are:
1.  Providing summaries of my research papers for nonspecialists, especially for papers that are paywalled.
2. Showing what it's like to be a research palaeontologist, for people who aren't scientists. (And, to be visibly female while doing so.)
3. Promoting the research environments of the various institutions I've worked at, to help increase the public's appreciation of research in museums and universities.
4. Talking about other issues of interest to me, like where palaeontology intersects with popular media and social justice issues. For this goal, I'm interested in reaching both scientists and nonscientists.

So, am I accomplishing any of those goals? I took part in Paige Jarreau's science blog survey and some of you were kind enough to fill out the survey, so here's a little bit of what I learned and how it relates to what I'm doing.

How are people finding my blog?
At least in terms of the people who answered the survey, most people seem to get to my blog via Facebook and Twitter, as well as the blogrolls of other palaeontology sites. But, about 20% of the respondents had only read one or two posts on my blog, suggesting that a fair number of people stumble across it without necessarily being deeply embedded within the palaeoblogosphere. Most of the survey respondents said they often seek out information about science online, and nobody said they rarely or never seek it out. Apparently, several of you were motivated to keep reading because you like my writing style, so thanks! That is nice of you to say!

How are people using my blog?
Many of the survey respondents read Pseudoplocephalus to keep up with the latest palaeo news and to find information that might not be reported in traditional media, so, cool. A bunch of you also wrote in that you come here to learn about ankylosaurs, so yay! Most of you do not come here for emotional support, which is also good, because ankylosaurs are terrible emotional support-givers. I recommend you check out Captain Awkward for the top-shelf adulting advice. Overall, I'd say the way people seem to be using my blog is in line with why I'm writing what I write.

Who are you people, anyway?
Several of the survey respondents noted that they know me personally. I AM BEING WATCHED, THANKS ANONYMOUS FRIENDS FOR CREEPIN' ME OUT. But seriously, that's not unexpected, and thanks creepy anonymous friends for filling out my survey. Out of the 102 people who filled out the survey, 67% identified as male and 31% identified as female. The biggest age cohort is YOUNGER THAN ME which is giving me SOME KIND OF FEELINGS. Most of you are also Caucasian, which means I need to do a better job of reaching out to non-white people or making my blog an inviting space for underrepresented minorities in science to come and have a look. I am not totally sure how to do this, so I guess I have some research ahead of me!

Lastly, it was interesting to see the self-identified occupations you all listed – while it is not surprising that many of you are grad students, palaeontologists, or other scientists, it was heartening for me to see that non-scientists are also reading the blog, at least sometimes. Another goal kind of accomplished!

So, am I meeting any of the general goals I keep in mind when I'm writing here? Kind of. At least in terms of people who felt compelled to complete the survey, I'm largely speaking to an audience of scientific peers. BUT, I'm also reaching at least a few people who are not trained scientists, and I suspect a lot more of the casual hits my blog receives each day are not from dedicated scientists. Thanks again to everyone who participated in the survey – many of you left awfully nice comments for me, which really made me feel like this continues to be worth doing, so thanks for the ego boost. It's been interesting to see who this blog is reaching and why people are reading it! I don't know how long I'll keep this blog going, but I don't have any intention of stopping soon and I'm glad I have an audience of people who think it's worth following. 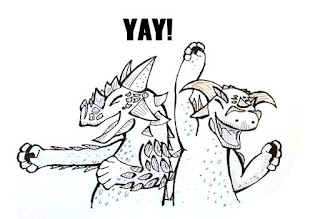 Posted by Victoria at 7:05 PM 9 comments: Links to this post

Heroes in a half shell 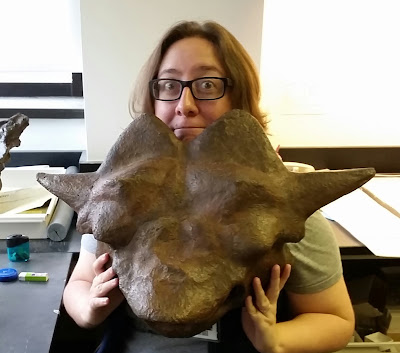 In my continued quest to betray my dinosaurian research roots, I went to the American Museum of Natural History in New York to look at turtles! And what turtles they were - this is the skull of Ninjemys (the ninja turtle!), a giant meiolaniid turtle from Australia. Meiolaniids are the best turtles you've never heard of and it's a crying shame that they don't feature more prominently in prehistoric popular media. 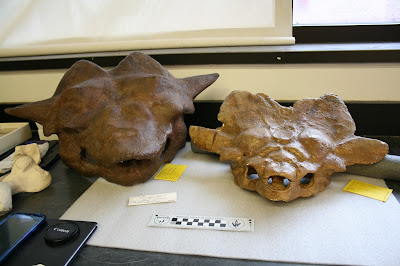 Meiolaniids are basically ankylosaur-convergent turtles, all of which are very large for turtles and some, like Ninjemys, which would have been legitimately huge. They are only found in the southern hemisphere (and really mostly in Australia and nearby), and they all have elaborate cranial ornamentation. On the left in this picture is that same Ninjemys skull cast, and on the right we have Niolamia from Argentina - smaller, but arguably even weirder with those huge nuchal crests flaring off the back of the skull. 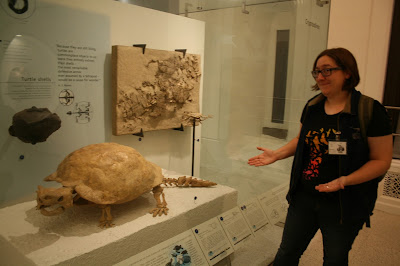 I'm interested in meiolaniids at the moment because they are one of the other groups of tetrapods that evolved a club-like tail weapon. Here's Meiolania platyceps, an island dwarf (!) meiolaniid, with some kind of boring mammal for scale. 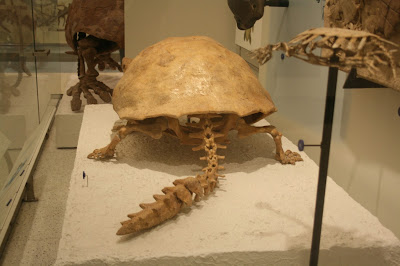 And here's the business end of Meiolania. Stay tuned for more exciting discussion of animal business ends in the future! 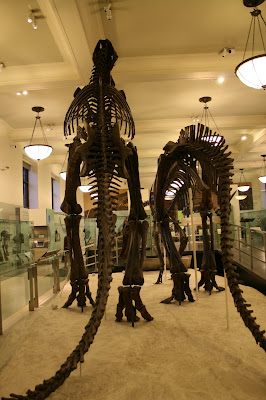 Since we're looking at animal butts today, apparently, here are some Edmontosaurus rears... 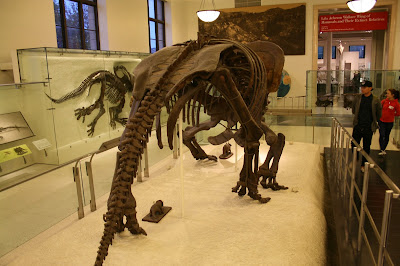 ...and a Triceratops derriere, for good measure. 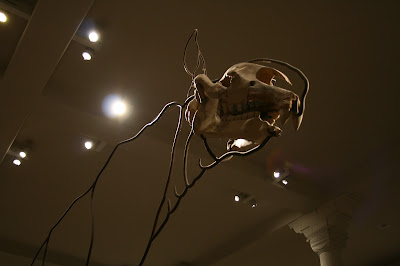 Elsewhere in the fossil halls, I enjoyed meeting the disembodied floating head of this indricothere, which makes for a nice counterpoint to the fleshed-out model currently on exhibit at the North Carolina Museum of Natural Science's feature exhibit Extreme Mammals. 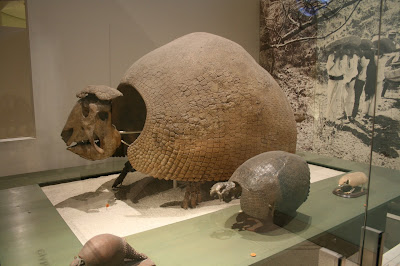 And here's a lovely trio of cingulates! The big fellow is the derived glyptodont Panochthus, the medium-sized fellow is the early glyptodont Propalaeohoplophorus, and off towards the back the little guy is the extant six-banded armadillo, Euphractus sexcinctus. The tail club on the Panochthus is mounted really weirdly, with it sticking straight out from the back of the shell rather than having any of the mobile rings from the base of the tail present, so I'm not sure what's quite up with that. 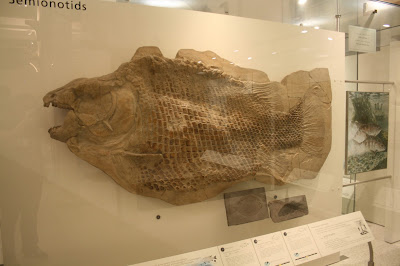 I post woefully few fish fossils on this blog, so here's a pretty great semionotid! 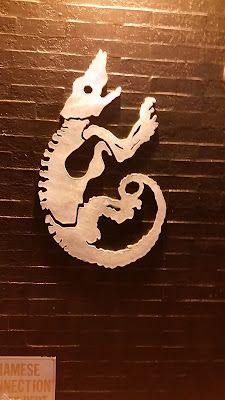 Science and anatomy and zoology are all around us if you keep your eyes open! I loved this chameleon logo on the side of a restaurant we came across one evening.
Posted by Victoria at 11:27 PM 9 comments: Links to this post