Did the sauropod Leinkupal survive the End Cretaceous mass extinction?

Discovery News has a short video up discussing a new paper in PLOS ONE, Gallina et al.'s "A diplodocid sauropod survivor from the Early Cretaceous of South America". I think it is really great that they want to showcase this interesting new find! But the DNews report leaves an awful lot to be desired.

The news report is titled "There's a dinosaur that survived mass extinction!", which would lead most people to think that some kind of post-Cretaceous dinosaur has been discovered. At about 25 seconds in, the reporter says this is the first time scientists have found a dinosaur that survived the great extinction, presumably referring to the End Cretaceous mass extinction that happened 66 million years ago. Right away, it seems that there's a huge misunderstanding here – there have been multiple mass extinctions in the history of life, not just the one that killed the non-avian dinosaurs. Additionally, the 'great extinction' should really refer to the End Permian extinction, by all accounts the most devastating mass extinction ever.

Anyway, Gallina et al. have described a new diplodocid sauropod, called Leinkupal, from the Early Cretaceous (probably about 140-130 million years ago) in Patagonia. This is significant because diplodocid sauropods were pretty abundant in Jurassic rocks from North America, Europe and Africa, but seem to have disappeared from the fossil record after the Jurassic. Since diplodocids were present in the Jurassic of Africa, it was also thought that they were probably present in the Jurassic of South America, but no fossils had ever been found. So, Leinkupal confirms one hypothesis (that diplodocids were present in South America), and also rejects another (diplodocid sauropods went extinct at the end of the Jurassic). Good stuff all around! But Leinkupal does not tell us that dinosaurs survived the 'great extinction' (whatever that is), and it certainly did not survive the End Cretaceous extinction, on account of it having been dead for about 70 million years before that happened. 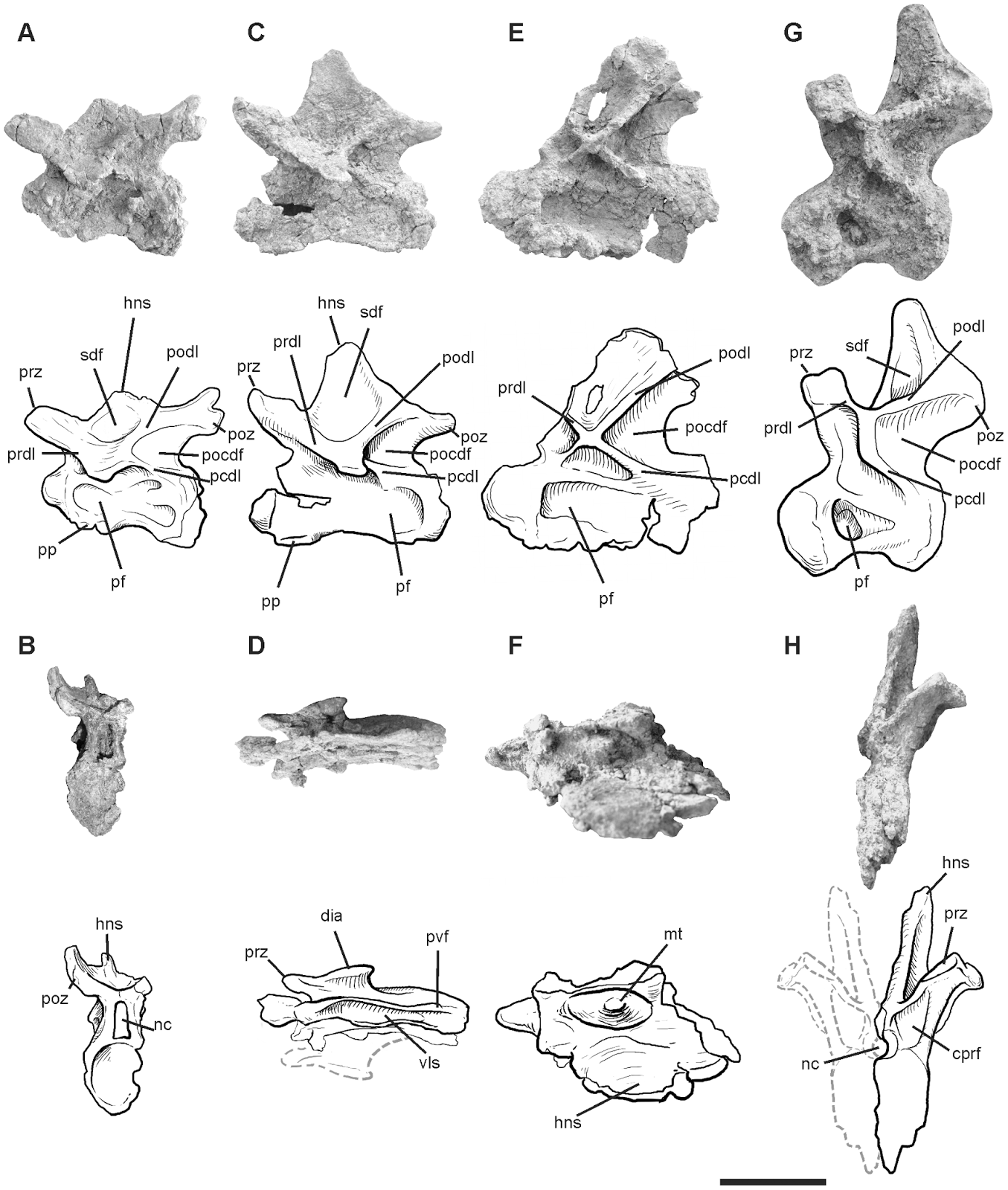 
This little video is an amazing microcosm of misconceptions about evolution and palaeontology, and it's really frustrating to see this coming from Discovery News. Here's some other little snippets:

* "The diplodocid sauropod is a family" – I hate to nitpick over grammar (wait, who am I kidding – I love nitpicking over grammar!), but the grammatical failure here I think represents a pretty basic misunderstanding of how taxonomy works. Later on, the reporter says of diplodocids that "the species was thought to be an exclusively North American dinosaur". Diplodocids are a subset of sauropods, in the same way that sauropods are a subset of dinosaurs. Diplodocidae is the formal 'family' name for this group, and Diplodocidae contains many genera and species. Some of these are familiar, like Diplodocus and Apatosaurus, some are less familiar, like Tornieria and some are new, like Leinkupal. We use classification systems to understand how animals are related to each other, and to understand the scale of certain biogeographic patterns. Getting this stuff right is both relatively easy and also important! 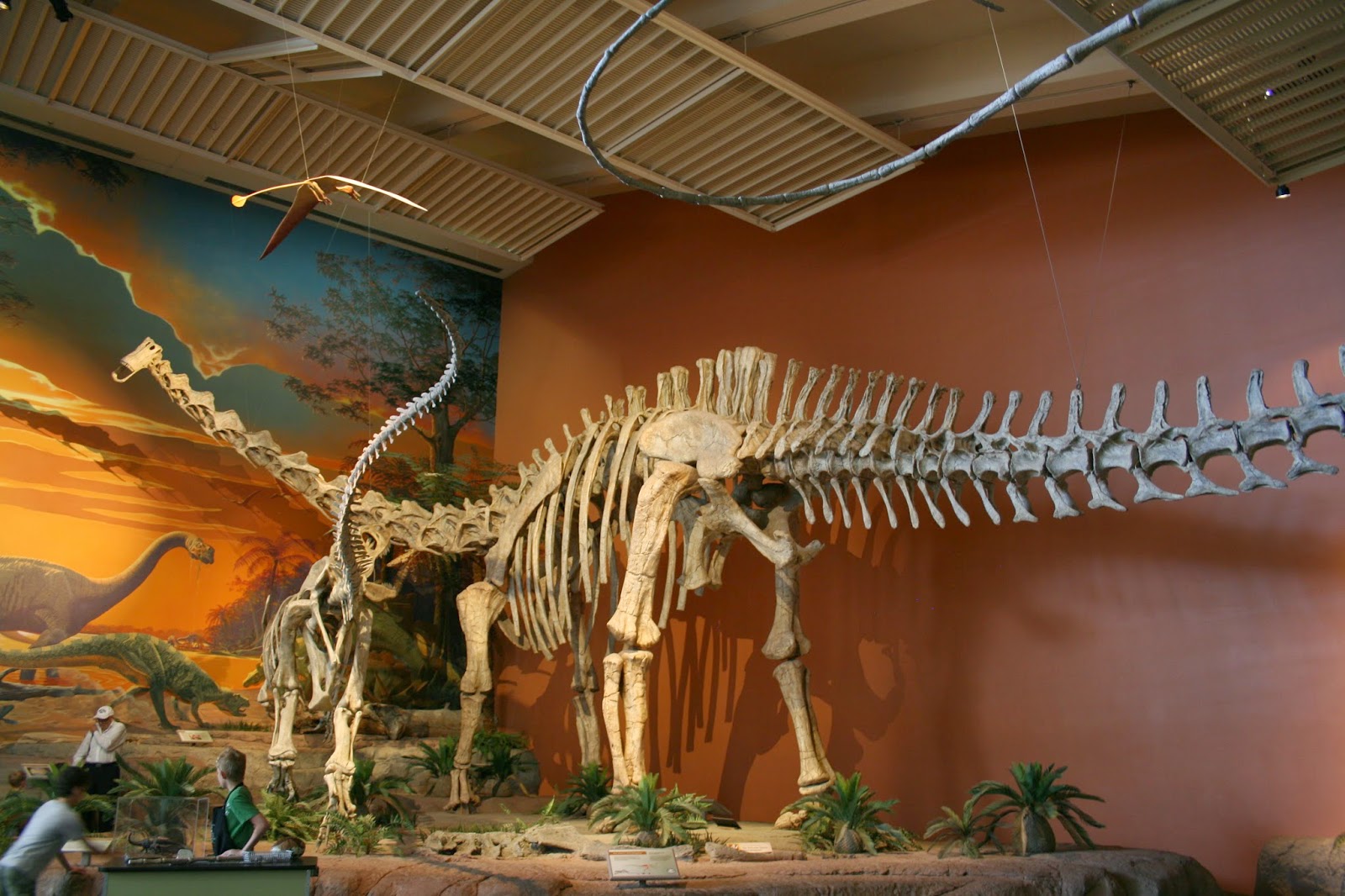 The imposing figure of "Seismosaurus" hallorum, a diplodocid from New Mexico on display at the New Mexico Museum of Natural History & Science. "Seismosaurus" is thought by some authors to be the same genus as Diplodocus.

*At one point, the reporter says that diplodocids were "assumed to have gone extinct", which is kind of true but also takes a lot of the science out of the story! Palaeontologists didn't just assume diplodocids were extinct, they observed the pattern in the fossil record in which diplodocids were present in some layers and then not in others, and concluded that either 1) diplodocid sauropods went extinct at the end of the Jurassic or 2) we have incomplete data, and sauropods may just not be preserved in the post-Jurassic rocks we've looked at. It turns out that the latter idea was correct!

* The reporter also states that Leinkupal was found in a place that palaeontologists never expected (South America), when in fact the biogeographic pattern of known diplodocids hinted strongly at the possibility of South American diplodocids. This is so great! We were able to use our knowledge of the fossil record to predict where we might find a kind of dinosaur that we had not found there before.

* Finally, the segment opens with the reporter making a show of how hard it is to pronounce the new dinosaur's name. It's true that Leinkupal doesn't have the familiar Something-saurus structure that lots of dinosaurs have, but it's not overly difficult to pronounce. There are two things that bother me here: 1) Why, Discovery News, are you making your female presenter pretend to be dumber than she surely is? and 2) An unfamiliar foreign word is made out to be this super weird and difficult thing, when they could have taken a moment to point out that this unusual name means "Vanishing family" in Mapudungun. It's a beautiful and evocative word that reflects the significance of the specimen, and highlights a local language that most of us are not familiar with. A moment that could have been used to learn something new was instead used to indicate that new things are weird and learning is hard.

This is really shallow and lazy writing. All of the important points to cover in a video segment of this length can be found in the three-paragraph introduction of the open-access paper. There's no excuse to not get it right. Instead of highlighting how this discovery shows the power of scientific predictions, we got a video that can't get basic facts correct, and pretends that this stuff is really hard rather than working to make it accessible to everyone.
Posted by Victoria at 12:09 PM 4 comments: Links to this post

Many animals have skeletons besides dinosaurs.

I was reminded of an old post on this blog today when someone brought up the all too common question of "Is that real?" in museums. In 2011 I had visited the Smithsonian natural history museum for some of my Euoplocephalus research, and spent a day browsing the galleries and shamelessly eavesdropping on people's conversations. I was dismayed by the number of people saying things like "What's that!" and then walking away without finding out, or saying "Look, a T. rex!" to things that were patently not T. rex. In the comments on that post, there was some discussion of the fact that visitors to museums often mistake any skeleton as a dinosaur skeleton.

Anyway, that in turn reminded me of a photo I took in the Nova Scotia Museum of Natural History's marine gallery a while ago: 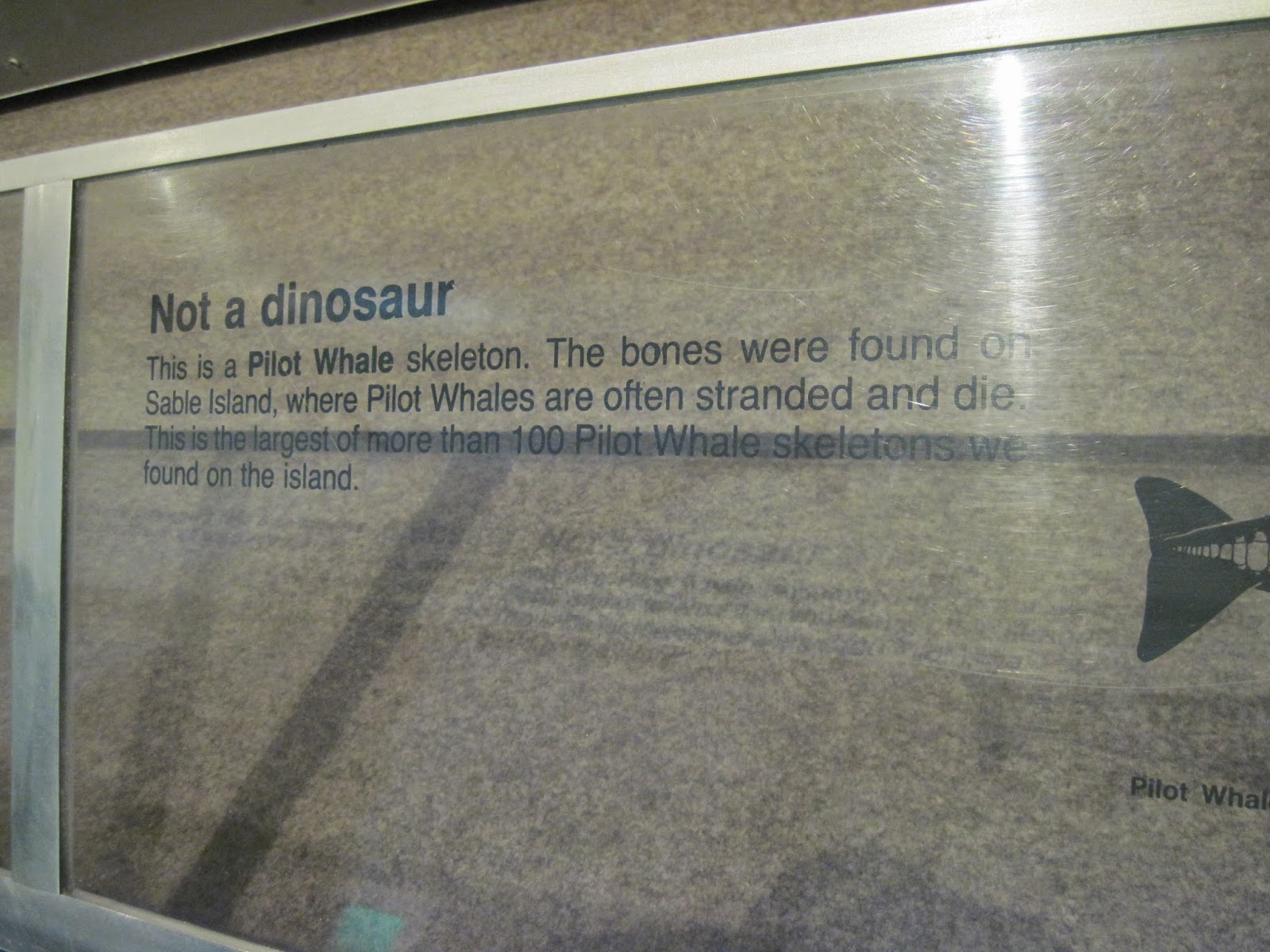 Despite being surrounded by all manner of marine specimens, including a fleshed out model of a sei whale up above, the museum has to explicitly say that a pilot whale is not a dinosaur. In fairness, the museum (sadly!) does not have any dinosaur skeletons, what with Halifax being located on top of the Cambrian-Ordovician Meguma Terrane, and with the Fundy Geological Museum fulfilling the role of the dinosaur-having museum in Nova Scotia.

What lessons can we learn from this?
1. Museum people: put a dinosaur in your museum. There's no excuse not to have one.
2. Everybody else: many animals have skeletons besides dinosaurs.
3. ????

*Bonus! Sable Island is a super neat place that not many people have heard about outside of the maritime provinces - you can read more about it at their National Park page!

Posted by Victoria at 4:10 PM No comments: Links to this post

The Systematic Position of the King of the Monsters

A few weeks ago I was really excited to be contacted by Danielle Venton, a freelance writer working on a piece for Popular Mechanics about the biology of Godzilla! With a new big-screen appearance by Godzilla right around the corner, I thought this was a fun exercise in speculative biology. The piece is out now at Popular Mechanics and I highly recommend checking out "The Impossible Anatomy of Godzilla".

I've always been a fan of B-movies (especially ones that have been MST3K'd) and monster movies, so, in preparation for the new Godzilla film, I've been trying to brush up on my kaiju history. Perhaps unfortunately, my introduction to Godzilla was with 1998's TriStar film, which seems to be uniformly considered not that great an entry into the monster's filmography. In the process of helping out with Venton's piece about Godzilla, I also came across some really fun previous discussions of Godzilla's anatomy. I heartily recommend checking out Darren Naish's "The science of Godzilla, 2010" and "The anatomy of Zilla, the TriStar 'Godzilla'" over at Tetrapod Zoology, and Brian Switek's "What kind of dinosaur is Godzilla?" over at Smithsonian.com. 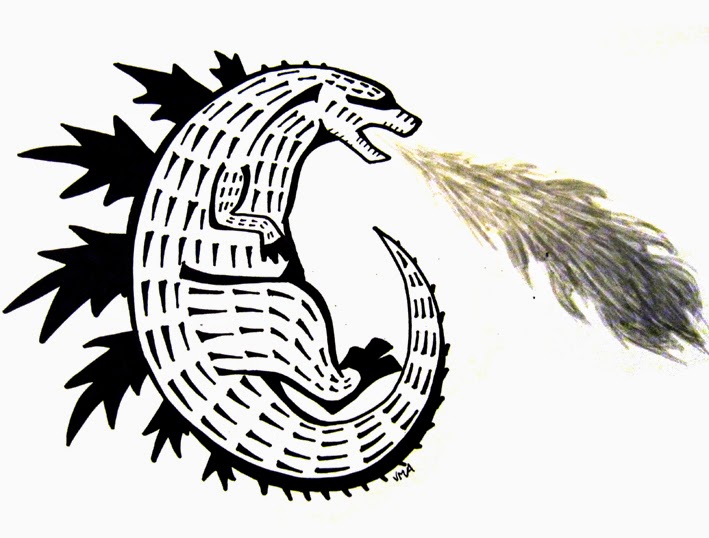 [Some of what I find is very silly. Godzilla flies using his rocket breath in Godzilla vs. the Smog Monster!]


Most discussions of Godzilla's anatomy use dinosaurs (for classic Godzilla) or lizards (for Zilla) as starting points, and it's generally understood that the original Godzilla design was a melding of an Allosaurus, Iguanodon, and Stegosaurus. However, it occurred to me that another group of diapsids might serve as plausible candidates for Godzilla's heritage: the pseudosuchians (or crurotarsans, if you prefer)!

Today's only living pseudosuchians, the crocodilians, have osteoderms in their skin, if somewhat less flamboyant than Godzilla's. The 'scale' pattern on their heads is actually formed through cracking of the skin during development, resulting in a texture similar to what's seen on Godzilla's body, which in turn is apparently supposed to resemble the keloid scars of nuclear explosion survivors. 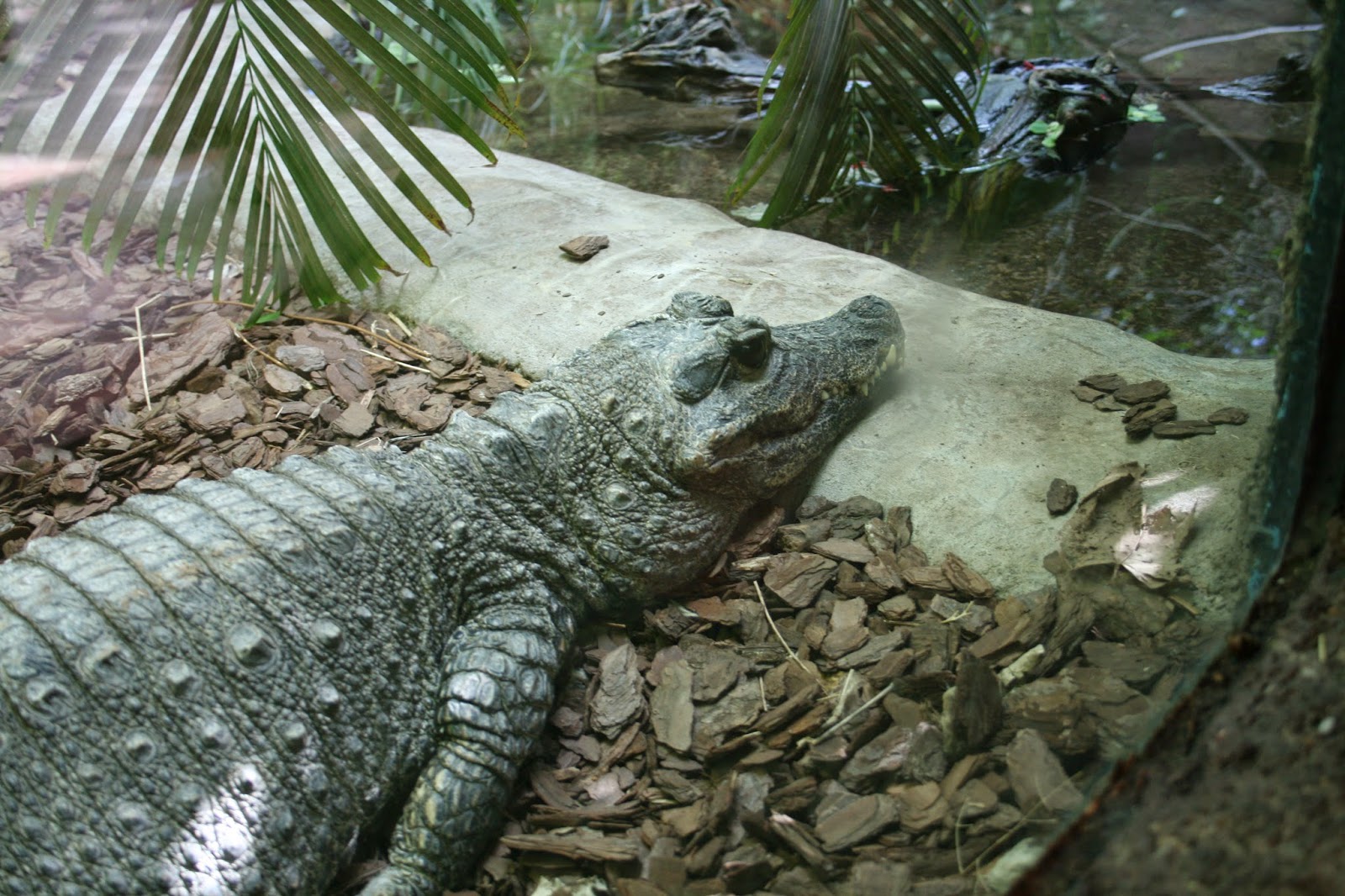 All living crocodilians are aquatic quadrupeds with powerful tails, and Godzilla seems to be a pretty good swimmer using his tail as a propulsive mechanism. Although many pseudosuchians were quadrupeds, some, like the poposauroids, were bipedal! Pseudosuchians seemed to have typically retained most fingers on the hand, like Godzilla, but unlike most theropod dinosaur lineages.

As far as I know, and I certainly haven't done a thorough literature search on this, there are no known pseudosuchians with nuclear breath....but alligators can produce a mighty bellow during breeding season.

Could Godzilla represent a long-lost and enigmatic lineage of pseudosuchian? Should there be a Godzillasuchus? Tell me what you think in the comments!