A couple of articles I've come across recently have gotten me thinking about dinosaur names, in particular a pair of (admittedly fluffy) articles on about.com, the "10 Worst Dinosaur Names" and the "10 Best Dinosaur Names".

It is interesting but somewhat disheartening to see how the public (and even other scientists, to be honest) react to certain dinosaur names, identifying them as 'good' or 'bad'. What makes a dinosaur name good or bad? I would argue that good names include something descriptive about the animal that sticks in your head, and that can be as simple as a location-based name or as complex as a clever word-play about the morphology or behaviour. Personally, I enjoy when new words, languages, or ideas are introduced into the name, things that haven't been used much previously. There's a lot of 'eo' and 'giganto' out there, and while that's not necessarily a bad thing, I certainly derive enjoyment from something unique. I'm not sure what would make a really bad name...perhaps something deliberately meant to look or sound similar to an existing name, thus causing confusion? Something offensive or rude? I can't think of any off the top of my head.

I am therefore disheartened when I see names considered 'bad' because they are too hard to pronounce. You know what? Lots of the dinosaur names are hard to pronounce...if English isn't your first language. In the "10 Worst" list, Futalognkosaurus (with futalognko derived from Mapudungun) sounds "like a hot dog", and Piatnitzkysaurus (named after a Russian-born Argentinian palaeontologist) has perhaps the worst writeup: "...the problem is that some paleontologists have cooler names than others." Yeah. By this logic, people with non-English names have less cool names, and that strikes me as an awfully wrong sort of thing to say or think. I see a lot of complaints whenever a Chinese dinosaur has a (gasp!) Chinese place name, and Zhuchengtyrannus comes to mind. Zhuchengtyrannus is a perfectly fine name. If you're not sure what to do with the 'zh' combination, look it up.

Just as an example, let's look at the list of names in the 10 worst and 10 best lists and see what languages they're derived from.

The ten worst:
1. Becklespinax: after fossil collector Beckles (England), spinax is either Latin or Greek
2. Futalognkosaurus: futalognko is from Mapudungun (Argentina), Greek saurus
3. Leaellynasaura: after the collector's daughter Leaellyn (Australia), Greek saura
4. Monoclonius: Greek
5. Mymoorapelta: from the Mygatt-Moore quarry, pelta from Greek
6. Opisthocoelicaudia: opisthocoel from Greek, caudia from Latin
7. Pantydraco: from Pant-y-ffynnon quarry (Wales) and Latin draco
8. Piatnitzkysaurus: after palaeontologist Piatnitzky (Russia) and Greek saurus
9. Sinusonasus: although I'm not sure, pretty sure sinusoidal and nasus are both Latin
10. Uberabatitan: from Uberaba locality (Brazil), Greek titan

I think it's pretty safe to say that the 'best' names are overwhelmingly Greek and Latin, and therefore relatively easy to pronounce by English speakers. I realize that this is a very small sample and perhaps I should not read so closely into it, but it bothers me when I hear people complain that dinosaur names are hard to say just because they are foreign-sounding. Palaeontology is not just for anglophones.


To end on a lighter note, here are a few names incorporating non-Latin or Greek words that I really, really like.
1. Balaur (a dromaeosaur): Romanian for dragon
2. Banji (an oviraptorosaur): Chinese for striped crest
3. Citipati (another oviraptorosaur):  Sanskrit for funeral pyre lord, and a character in Tibetan Buddhist mythology
4. Ilokelesia (an abelisaur): Mapuche for flesh lizard
5. Jeyawati (a basal hadrosauroid): Zuni for grinding mouth
6. Kakuru (a theropod, maybe a coelurosaur): Guyani (Australian) name for the mythical Rainbow Serpent
7. Kol (an alvarezsaur): Mongolian for foot
8. Seitaad (a prosauropod): a sand-desert creature from Navajo mythology
Posted by Victoria at 7:20 PM 15 comments: Links to this post

Email ThisBlogThis!Share to TwitterShare to FacebookShare to Pinterest
Labels: not work

For those who are keeping track of such things, I'd like to point out that a corrigendum to the Gwawinapterus paper is available online, noting a change in specimen number for the holotype. The specimen is now housed at the Royal BC Museum in Victoria, British Columbia, Canada, under the accession number RBCM.EH2011.003.0001. You may have encountered some news reports discussing controversy over the naming and credit for discovery of the specimen. Gwawinapterus stands as a valid name, but our corrigendum clarifies that the specimen was originally discovered by Sharon Hubbard, a resident of Parksville, BC; Graham Beard brought the specimen to our attention.

Email ThisBlogThis!Share to TwitterShare to FacebookShare to Pinterest
Labels: Gwawinapterus, pterosaurs, the literature

The winter term draws to a close, the fossils come out of hiding one last time.

We are very fortunate at the University of Alberta to offer several courses in Palaeontology (and not just through zoology or biology - they get their own PALEO course code). PALEO 418 and 419 cover vertebrate palaeontology in lecture and lab format, PALEO 414 focuses more on invertebrate paleontology and functional morphology, and PALEO 400 is a field school held right in Edmonton at the Danek hadrosaur bonebed.
Lucky for me, I got to TA the PALEO 419 labs this semester. PALEO 418 covers the origins of vertebrates, fish, early tetrapods, turtles, lepidosauromorphs, and marine reptiles. PALEO 419 covers the synapsids and archosauromorphs. And that means I get to teach people about dinosaurs! 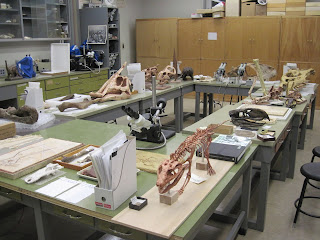 The archosauromorph lab exam was held this week, and most of the specimens were out for review. It made for a pretty impressive sight when you walked in the lab. 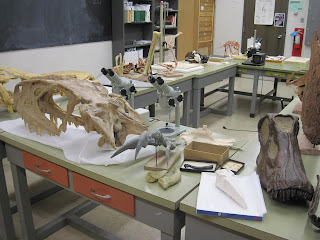 Because a variety of instructors have taught this course over the years, we have a pretty good collection of teaching casts and specimens that covers a fair amount of archosauromorph diversity. Most of the specimens are casts, but we do use some original material that's relatively sturdy and/or abundant (things like ankylosaur osteoderms, hadrosaur limb elements, teeth, etc). The U of A also has a small but excellent palaeontology museum in the Earth Sciences building, and students are expected to check out certain specimens there throughout the semester. Because we have a variety of ceratopsian specimens from Dinosaur Park and Grande Prairie being prepared in our prep lab, we also did a 'field trip' there during the ceratopsian lab. Prospective students: the U of A is a good place to be for palaeontology! 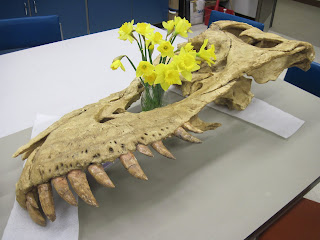 But today the students wrote their exam, which means the semester is over for me (except for marking, of course)...and perhaps spring is on the way?*

*spring doesn't happen until June in Edmonton. Oh well.﻿
Posted by Victoria at 6:05 PM No comments: Links to this post

River of Death gets a name change.

I haven't talked a whole lot here about the Pipestone Creek Dinosaur Initiative or the proposed River of Death and Discovery Museum. The area around Grande Prairie, Alberta, about a five hour drive northwest of Edmonton, is rich in Late Cretaceous fossils. The most famous locality is Pipestone Creek, where hundreds of the horned dinosaur Pachyrhinosaurus perished millions of years ago.

For nearly ten years, a dedicated group of folks in Grande Prairie have been trying to get their own palaeontology museum off the ground. The working name for the museum was the River of Death and Discovery Dinosaur Museum. However, the word 'death' in the museum name has made it difficult for the museum to get as many sponsors as they would have liked.

And so it was announced yesterday that the museum would be renamed to the Philip J. Currie Dinosaur Museum! You can read more about the name change at the Grande Prairie Daily Herald-Tribune's article.

There are some exciting things coming up this summer for the museum foundation, including the Akroyd Family and Friends Dinosaur Ball (yes, those Akroyds!), and the University of Alberta will return to our annual excavations at the Wapiti River Pachyrhinosaurus bonebed and the newly-reopened Pipestone Creek bonebed. 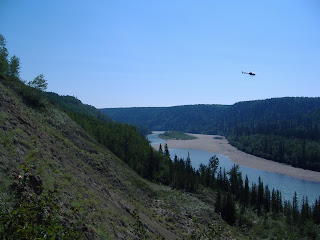 A helicopter approaches at the Wapiti River bonebed during the 2009 excavation. Helicopter lifts are the only way the large blocks can be brought up to the edge of the river valley.
Posted by Victoria at 5:56 PM 1 comment: Links to this post