SVP, you're so silly.

Those chairs nearly killed me.
The annual Society of Vertebrate Paleontology meeting wrapped up yesterday. This year we got to visit the very nice city of Raleigh, North Carolina. There were many, many interesting talks and posters which I can't possibly cover in detail here, but I will look forward to the papers that will hopefully eventually come out of this meeting. SVP is the big-time serious palaeo conference for most of us here in North America...and yet, although at times the talks are SO SERIOUS, what I really like about SVP is how much fun everyone is having. And this brings me to the chairs. The chairs at the Raleigh Convention Centre seem to have built-in whoopie cushions. If you sat down too quickly, the result was unavoidable. (Raleigh Convention Centre: please don't change this!) And so, during the transition between each talk as people moved in and out of the session, a low murmur of toots resonated throughout the room. This was pretty funny during the talks, but was almost unbearable during the final banquet and awards ceremony on Saturday night. As we recognized the contributions of various members of the SVP, we would rise to give standing ovations. And as about 1000 people sat down simultaneously, the squeaky chairs were that much more noticeable.
Now, I don't mean to go on and on about the chairs...but the thing was, as the awards ceremony went on, I'm pretty sure the majority of people in the room were making a conscious effort to make the chairs squeak more loudly. SVP, I love you even more for this.

I love that our society gets the conference started with a big party in a museum, this year the North Carolina Museum of Natural Sciences. We got to hang out with Jane and Acrocanthosaurus! 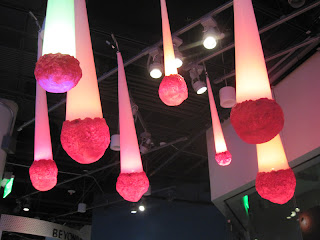 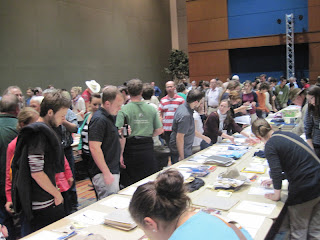 I love that the SVP hosts a giant silent auction to raise funds for various society projects. And I love that so many people donate so generously, and that so many talented people make awesome stuff for the auction. 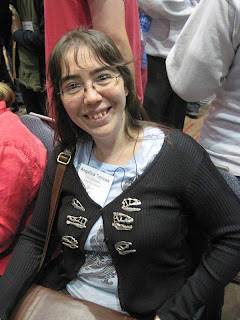 I love that my colleagues wear ALL THE PINS. 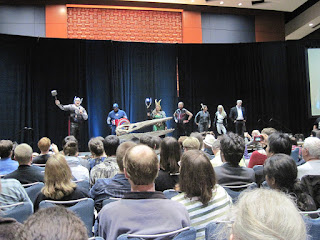 I love that the auction committee dresses up for the live auction. Avengersaurs, assemble!
I love that the conference ends with a giant dance party featuring "Walk the Dinosaur", "I am a Palaeontologist", and "Time Warp". I love that so many of my colleagues are awesome dancers!
There's a lot to love about SVP and palaeontology, but most importantly I love that we don't take ourselves too seriously. We're passionate about our science, we're doing awesome and interesting research, and we're having fun. See you next year in Los Angeles!

(Also required reading: What do vertebrate paleontologists talk about?)

BREAKING UPDATE 22/10/2012: The squeaks have been recorded for posterity!
Posted by Victoria at 12:35 AM 3 comments: Links to this post


A message from my colleague Dr. Phil Bell:


Hi all,
Some of you are already aware of the Philip J. Currie Dinosaur Museum, which is scheduled to be built in Grande Prairie, but certainly all of you are aware of Philip Currie himself. As part of the final push to raise the remaining construction funds, we have launched a crowd-fundraising campaign on www.indiegogo.com/curriemuseum. The aim is to raise $1,000,000 in 120 days. In the first hour alone, we raised $1,600!
Every donation, no matter how small, is important and donors are rewarded with a range of increasingly cool gifts including a museum logo pin, t-shirts, and original artwork by palaeo-art master Julius Csotonyi. It's all outlined on the website, so please check it out, spread the word, and help us build a world-class museum and research institute.

Many thanks!
Phil Bell
Head Palaeontologist
Pipestone Creek Dinosaur Initiative
The Philip J. Currie Dinosaur Museum has been working hard to raise funds for the construction of the museum, which will showcase fossils from northwestern Alberta and support research and education on Albertan dinosaurs. They've raised $17.4 million of the $30 million needed. Even without a museum building, the crew from the Currie Museum is doing an incredible amount of education, outreach, and research. Just last week, Phil visited the University of Alberta to CT scan a hadrosaur with skin impressions from Red Willow Creek. But it can only continue if the museum is funded and built. Please support the museum - they are good folks up there, and every little bit helps! 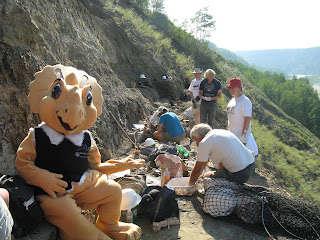 Aluk the Pachyrhinosaurus visits the Wapiti River Bonebed in 2009. 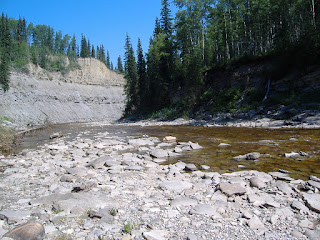 Hadrosaur mummies have been collected along Red Willow Creek. 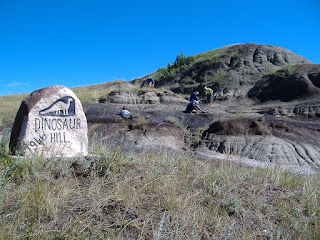 New fossil lizards have been described from Kleskun Hills, the northernmost outcrops of badlands in Alberta. 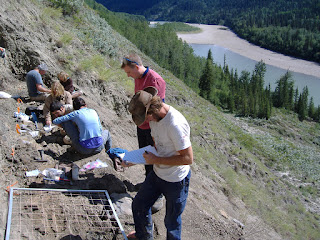 The Wapiti River Pachyrhinosaurus bonebed has been excavated each year since 2007. We're still preparing material from that bonebed in order to figure out which species of Pachyrhinosaurus we have!


Posted by Victoria at 2:43 PM No comments: Links to this post