May your mountains dark and dreary be.

Just wanted to give a quick shout out to some old fossil friends of mine. Horton Bluff/Blue Beach is a pretty cool place and I have fond memories of field trips out there during my Dalhousie days. Between this new paper and the recent paper describing the Permian to Jurassic assemblage of tetrapods, it's been a good time for Nova Scotia palaeontology. 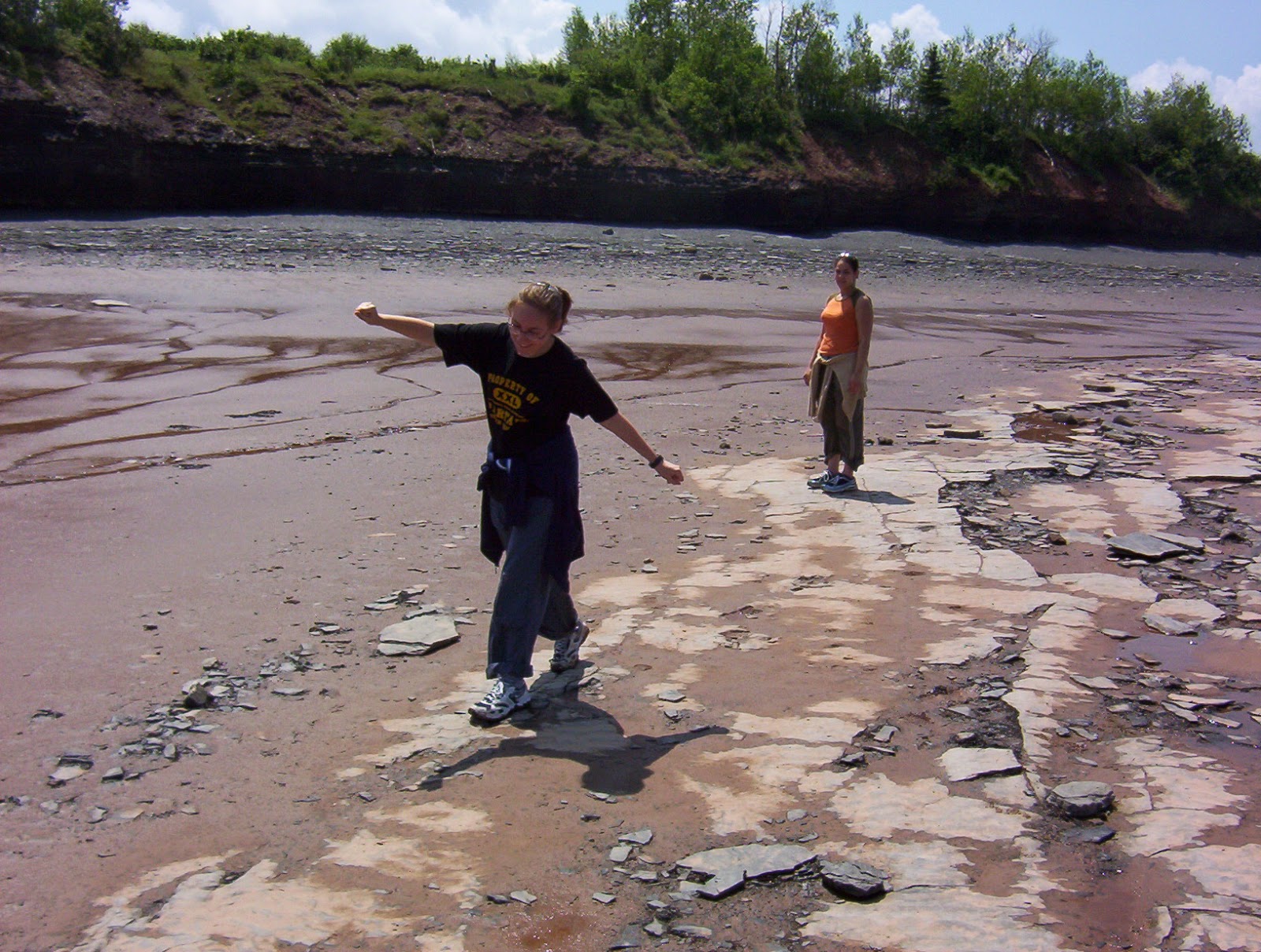 Your friendly neighbourhood ankylosaur palaeontologist, in the before time (i.e. 2003), at Horton Bluff, following in her tetrapod ancestor's footprints. It's goopy there.

Which of course makes me miss it all terribly.

Sues H-D, Olsen PE. 2015. Stratigraphic and temporal context and faunal diversity of Permian-Jurassic continental tetrapod assemblages from the Fundy rift basin, eastern Canada. Atlantic Geology 51:139-205.
Posted by Victoria at 12:04 AM No comments: Links to this post

Palaeontology emergency alert! This is not a drill! Brontosaurus is back! 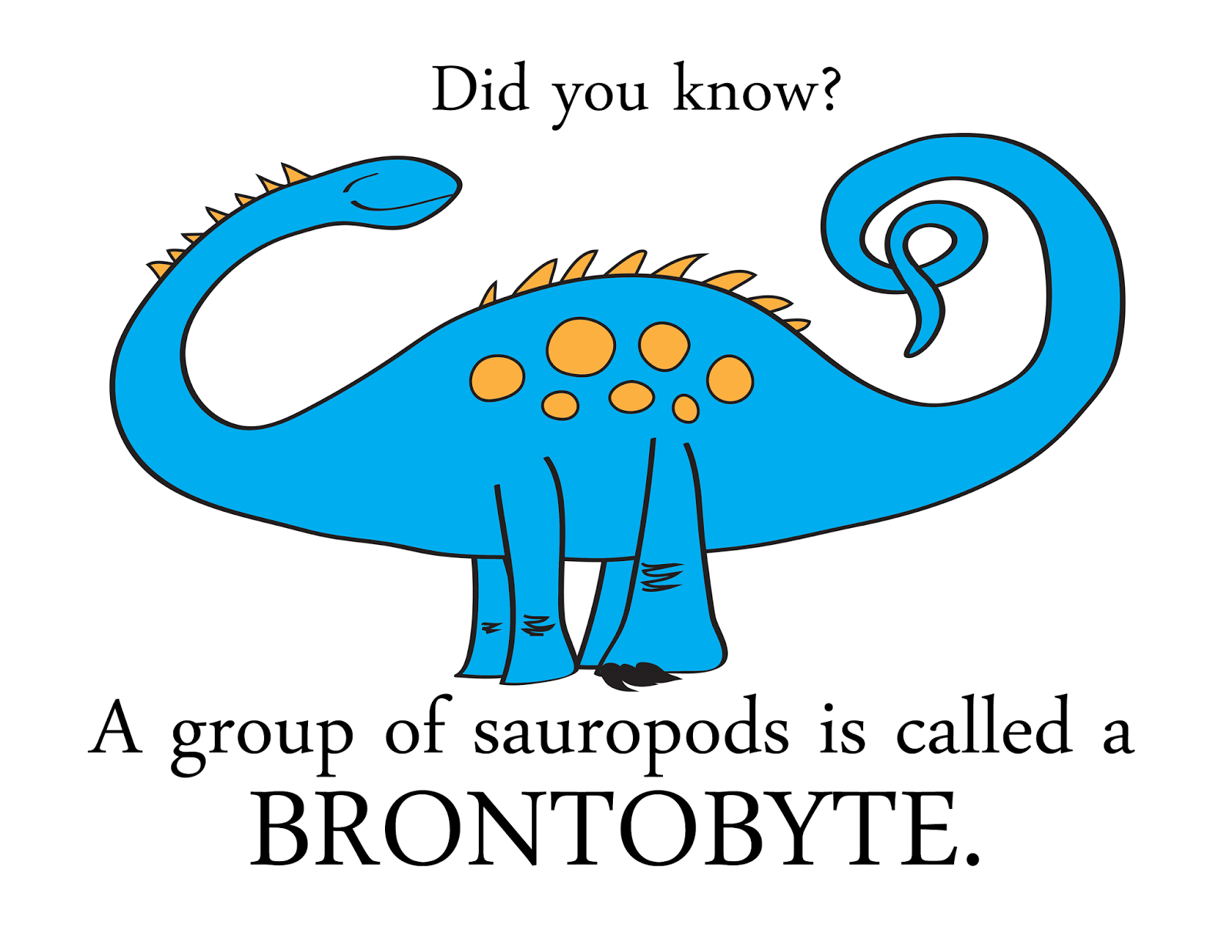 YES I FINALLY GOT TO USE THIS ON THE BLOG. Success!

I mean, Brontosaurus never really left. That's the nice thing about taxonomy – once a name is out there, it's there forever, even if we decide later on that it might represent the same kind of animal that another name does. And so every now and then, we get to bring an old name back from the dead. Today, Tschopp and colleagues have published some very good support to indicate that Brontosaurus really is distinct from Apatosaurus after all, and we can all use that name and stop telling people that Brontosaurus isn't real. OMG, WHAT A RELIEF.

To recap: Brontosaurus has not been an accepted name in the palaeontological community for more than 100 years, but because of its use in some museum exhibits, and things like the 1964 World's Fair and the "Rite of Spring" passage in Fantasia, for example, the name has become entrenched in the popular consciousness in a way few other dinosaur names have. It is very disappointing to learn that palaeontologists don't call that big dinosaur Brontosaurus, but the decidedly less evocative name Apatosaurus instead. 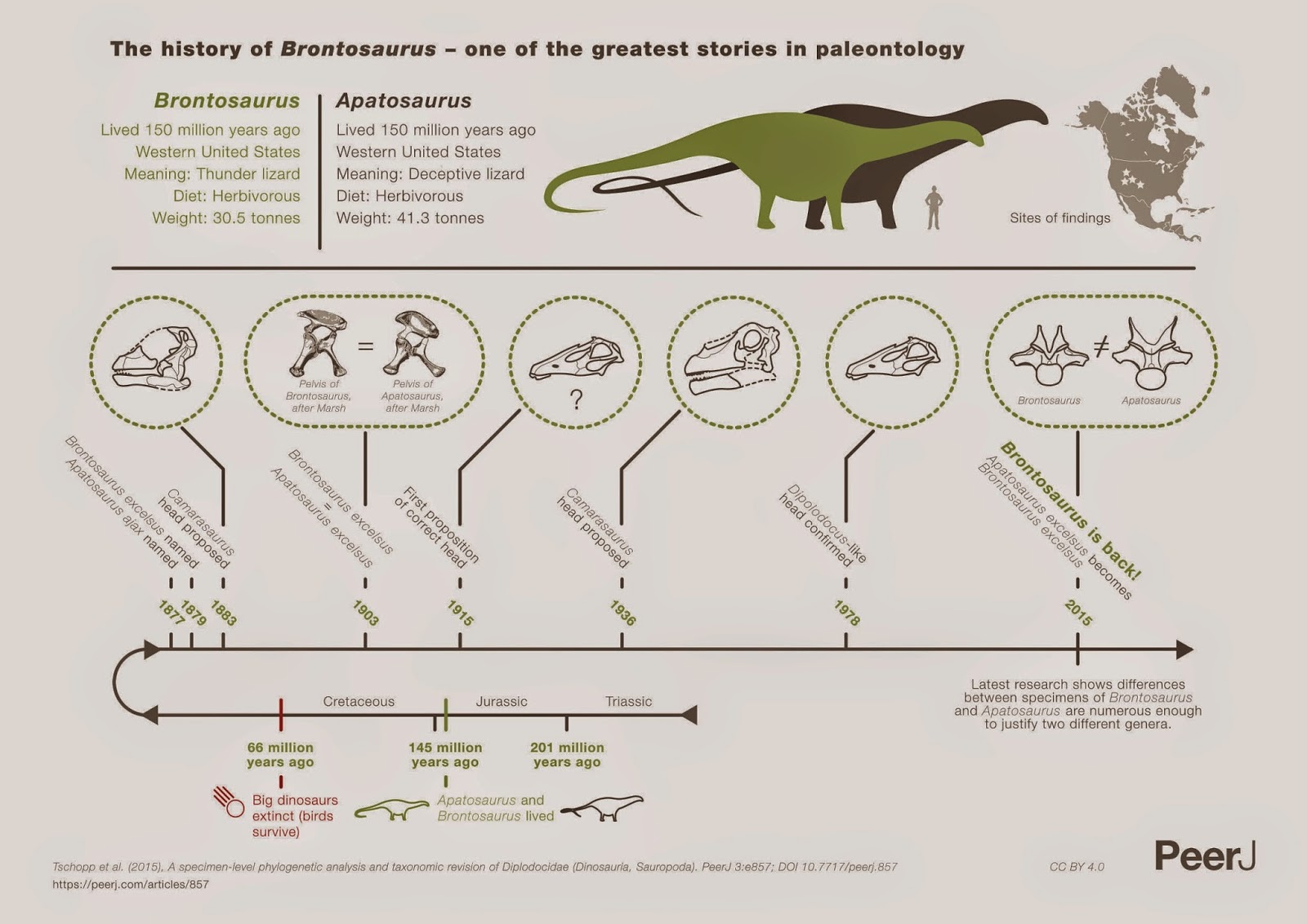 Click for sauropod-size. With many thanks to the authors and PeerJ for creating such a useful diagram, which I'm sure will be reproduced often and with much gratitude by palaeontologists, teachers, and other science communicators.

The new paper is staggering in its length (almost 300 pages!) and the amount of work it represents, and I'm not a sauropod specialist, so I'll summarize it here without delving into sauropod anatomy very much: 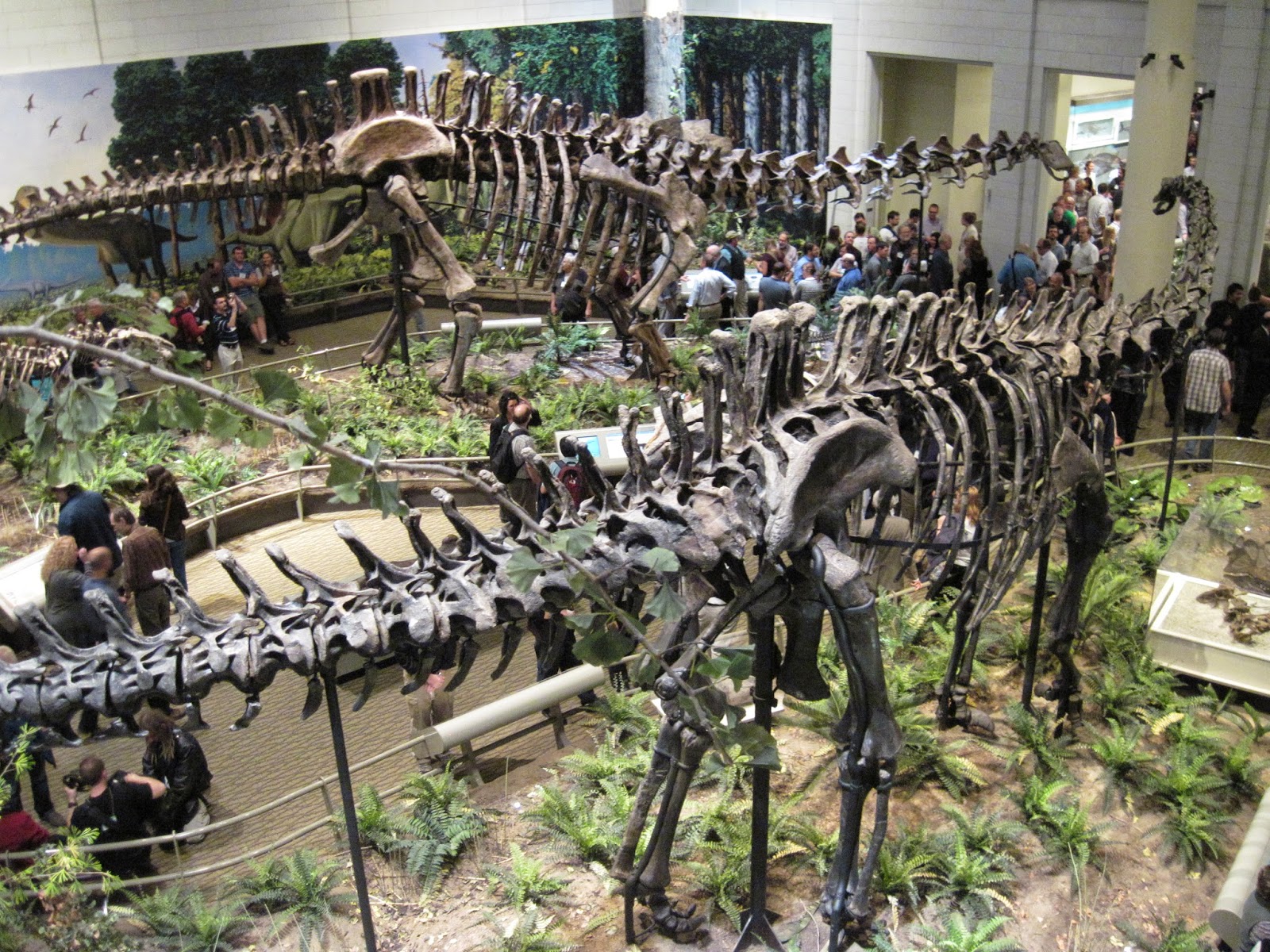 Two of the Big 3 diplodocids: Apatosaurus (in the back) and Diplodocus (foreground) face-off at the Carnegie Museum.

a.       Diplodocus longus lacks any diagnostic features at the species level and is a nomen dubium, which is bad because it's also the type species for Diplodocus. A petition to the ICZN to switch the type species to D. carnegii is in the works. Diplodocus includes the species D. carnegii and D. hallorum (née Seismosaurus)
b.      Dinheirosaurus (from Portugal) is a junior synonym of Supersaurus, and so Supersaurus is a cross-continental genus represented by two species.
c.       Diplodocus hayi passes the threshold for generic distinctiveness from Diplodocus and gets a new name, Galeamopus hayi. Specimens of Galeamopus are actually more complete than Diplodocus, which means that Diplodocidae is best represented by Galeamopus at present if you need a diplodocid for whatever you're working on.
d.      And finally, and arguably most significantly, Brontosaurus passes the threshold for generic distinctiveness from Apatosaurus. There are three species within Brontosaurus: B. exelsus ('classic' Brontosaurus), B. parvus (née Elosaurus), and B. yahnahpin (née 'Eobrontosaurus'). 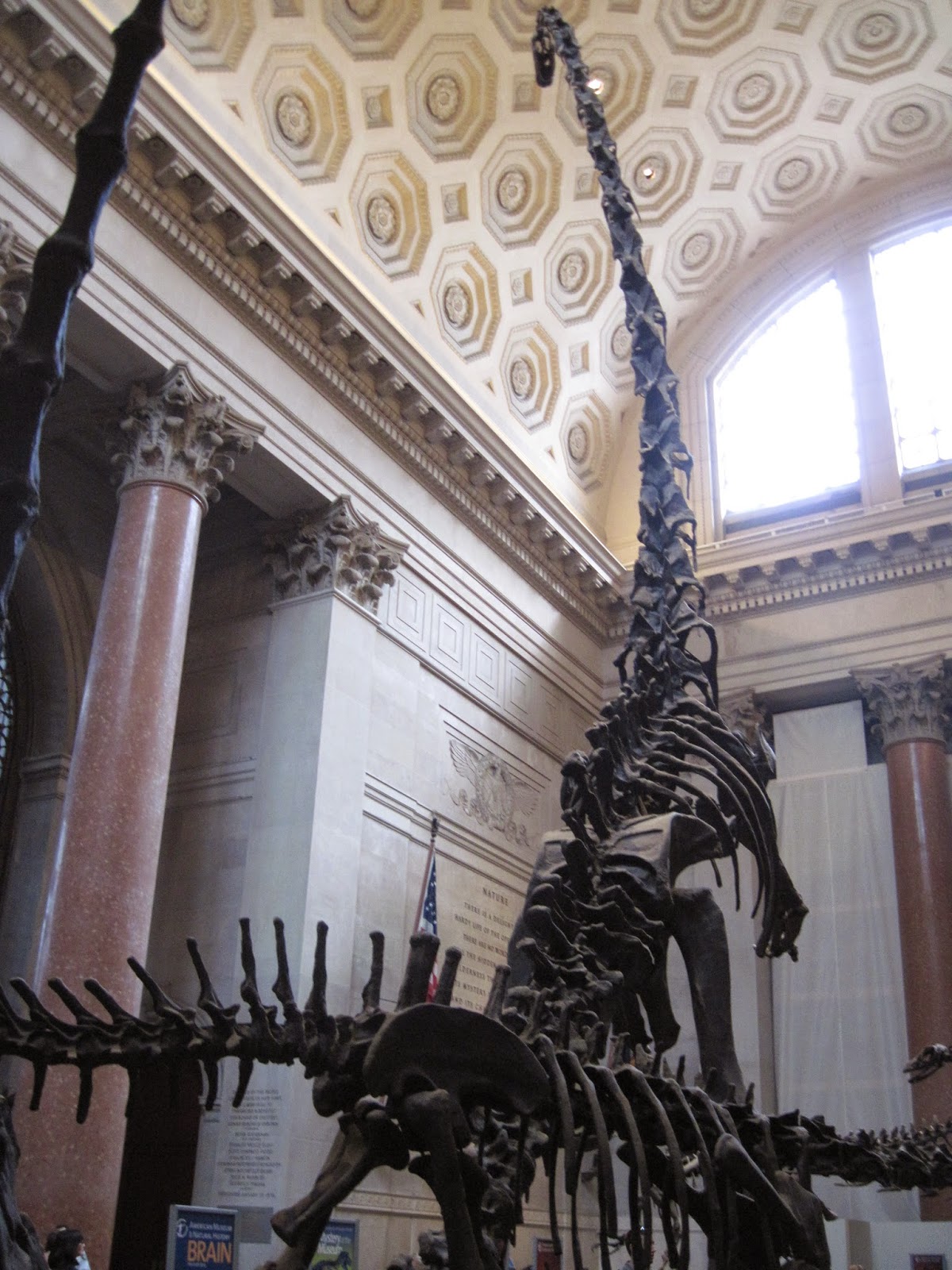 The third of the Big 3 diplodocids, the iconic rearing Barosaurus at the American Museum of Natural History.

I really hope this taxonomic shuffling gains wide acceptance, because 1) I think their approach and reasoning are pretty sound, and 2) it's going to be SO MUCH EASIER not to have to constantly 'debunk' Brontosaurus with non-palaeontologists.The oft-repeated story that "Brontosaurus" wasn't real because it had the head of one animal and the body of another is wrong, but the real story, about the rules of taxonomy and how we define species, is much more difficult to explain. (It's interesting, but it's not as easily parsed to a lay audience.) And let's face it, Brontosaurus was a really good name and it was sad that it had to be synonymized. The story of Brontosaurus now has a new and interesting chapter – our ideas about the biology of Brontosaurus have changed, but now we can talk about changes to how we think Brontosaurus looked and lived, rather than just focusing on a quirk of taxonomy. So let your Brontosaurus flag fly high, dinosaur fans, because Brontosaurus is back and that's awesome. 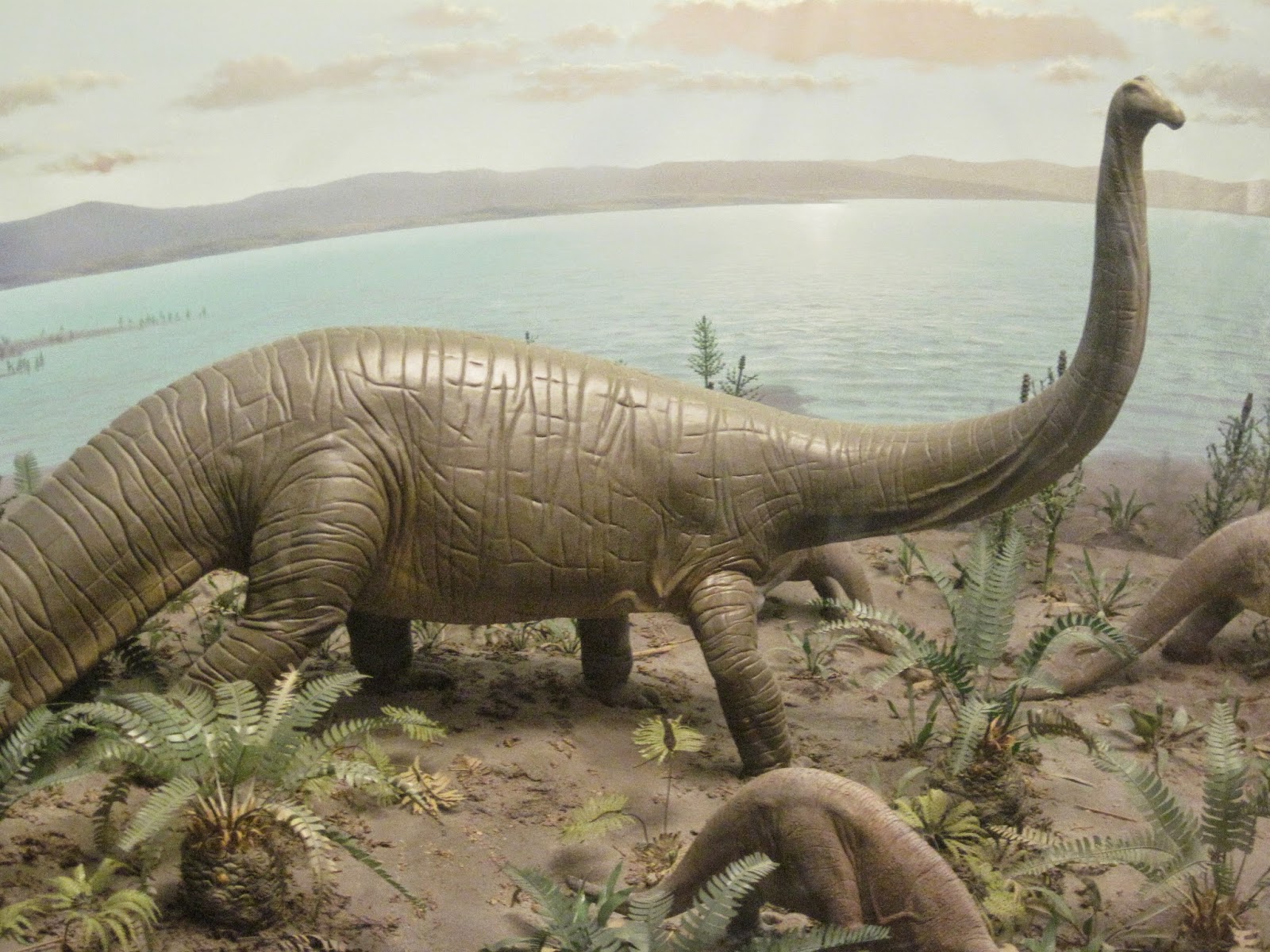 Old-timey sauropod in the little diorama at the Smithsonian, back in 2011.

Big taxonomic revisions are hard and important but often don't feel as 'sexy' as some of the other research that gets publicized. I like thinking about alpha taxonomy (uh, perhaps obviously) and I like doing this kind of research, and I think it's really important that we recognize how important this kind of work is – alpha taxonomy is really foundational to a lot of other studies. If you don't know how many species you have, or where they lived, or what anatomy belongs with each species, how can you do projects that look at the evolution of certain features through time, or understand changing ecosystems?

For example, given that there's at least 14 species of diplodocid in only 11 million years of Morrison Formation, it's unlikely that there's a slice of time in there in which there's only one diplodocid species. (And remember, diplodocids weren't the only sauropods in the Morrison – this is also the home of Brachiosaurus and Camarasaurus and Suuwassea and who knows what else.) This is a pretty good reason to reject what I like to call the "Highlander hypothesis", i.e. There Can Only Be One ___(ankylosaur, tyrannosaur, whatever)___ in a given formation, something that I've encountered in conversations on occasion. It's understandable that we would feel unease at the idea of high species/generic diversity in such massive dinosaurs, because how are they dividing up ecosystem space? But over and over again it seems like lots of similarly-shaped dinosaurs were occupying similar times and spaces in terms of what we see in the rock record, which I find very interesting indeed. (Now what we need is a really good stratigraphic framework for putting all of these diplodocids into chronological and geographical context.) We can only do a good job of addressing these kinds of questions by having good data to put into those studies, and that data comes from taxonomic revisions like this one.

And revising taxonomy is probably a never-ending job, because we need to keep reassessing our definitions of genera and species as we get more information through new specimens. Let's make sure we all support this kind of research as palaeontology continues to evolve with new techniques, questions, and approaches. Bully for Brontosaurus, and bully for alpha taxonomy.

Last week's #MuseumWeek tweetstorm was an awful lot of fun, especially following the #SciArt event just a few weeks earlier. I thought I'd share a couple of photos and thoughts for each day's theme – I didn't manage to post something for each day on Twitter, but I'll fill in some thoughts and photos here!

Day 1: Secrets
One of the nice things about working in the Paleontology & Geology Research Lab at the North Carolina Musuem of Natural Sciences is that "behind the scenes" is part of the scene. You can actually stare at me while I'm working away at my computer each day, if you desire to do such a thing. More interesting, probably, would be to watch our staff, students, and volunteers preparing fossils in the main lab space - secrets waiting to be revealed. But hey, whatever floats your boat! 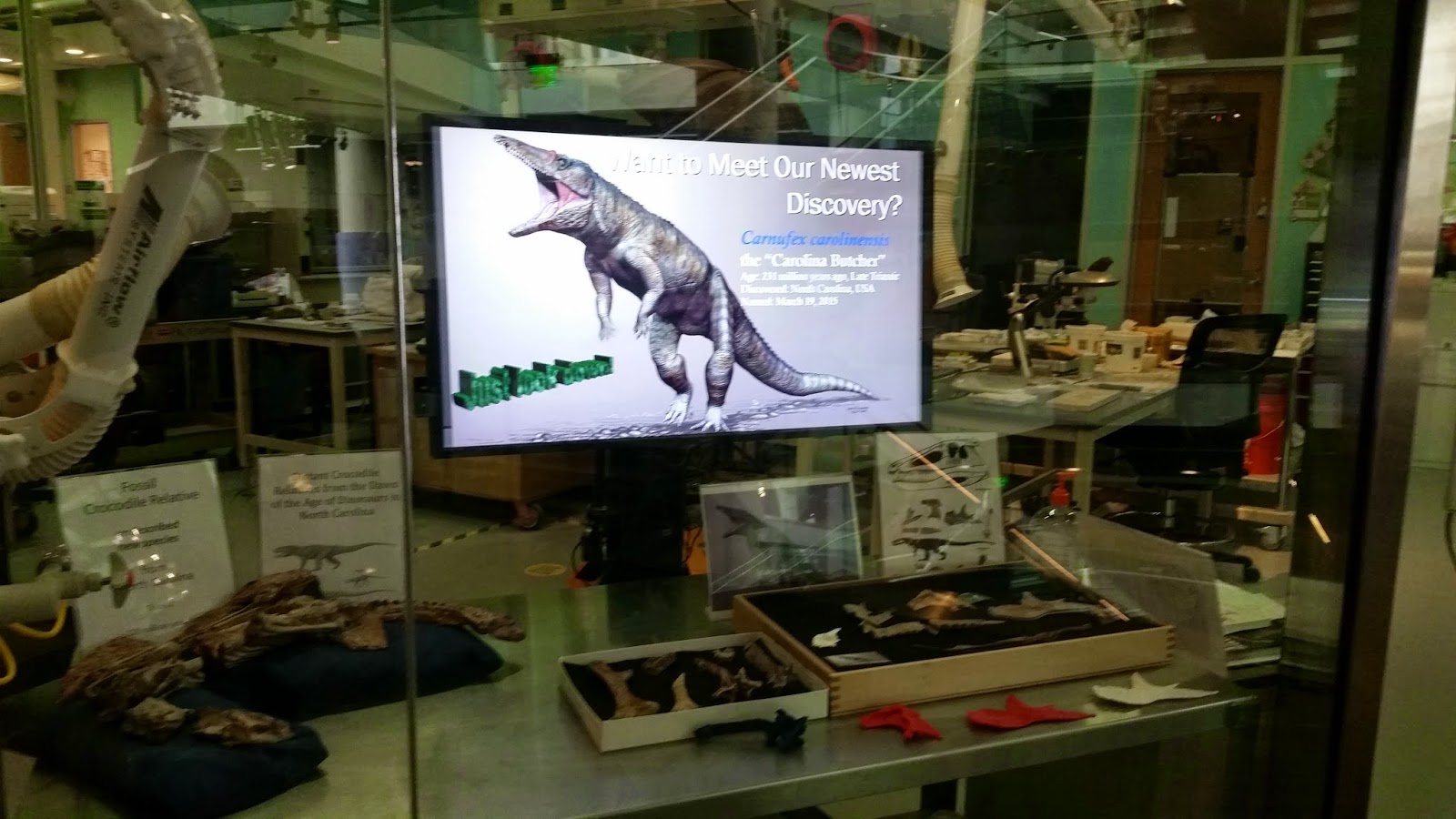 If you're in Raleigh, stop by and say hi to Carnufex!

Day 2: Souvenirs
I am kind of a Stuff Person and also have a Thing for Museum Gift Shops. As such, I have loads of doodads from my various museum visits. One of the things I like picking up are postcards, especially those that have non-Tyrannosaurus dinosaurs featured on them. For a while, I had these up on my wall at my apartment in Edmonton. Those who have visited my UofA office will also be familiar with my embarassingly large collection of ankylosaur toys, or as I prefer to refer to them, 'scientific models for grown-ups'.

Recognize any museums from your own travels?

Day 3: Architecture
I had a lot of fun with this one on twitter because I LOVE interesting museum architecture. A couple of favourites: 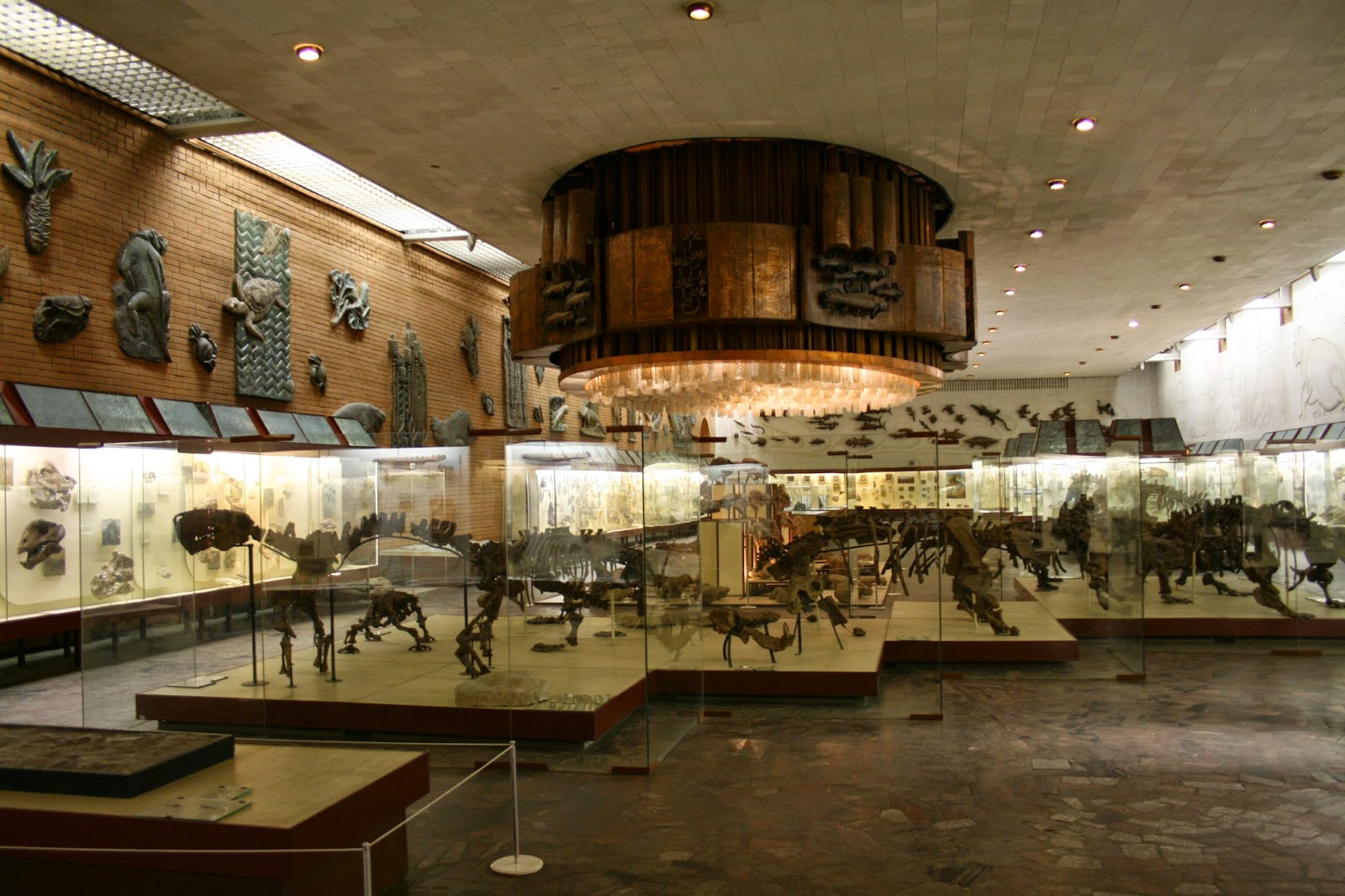 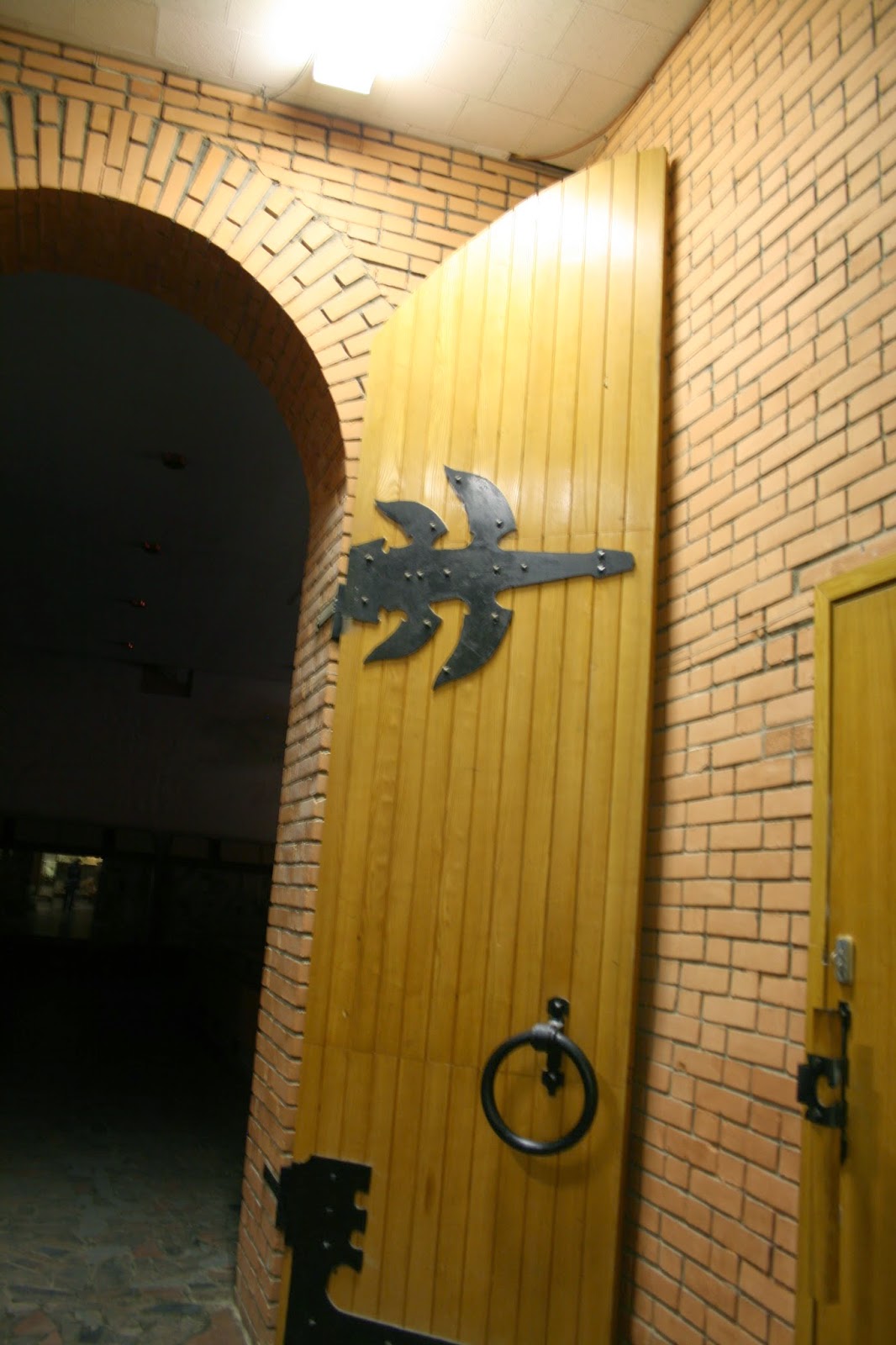 Dinosaur museum in an old castle in Lerici, Italy: 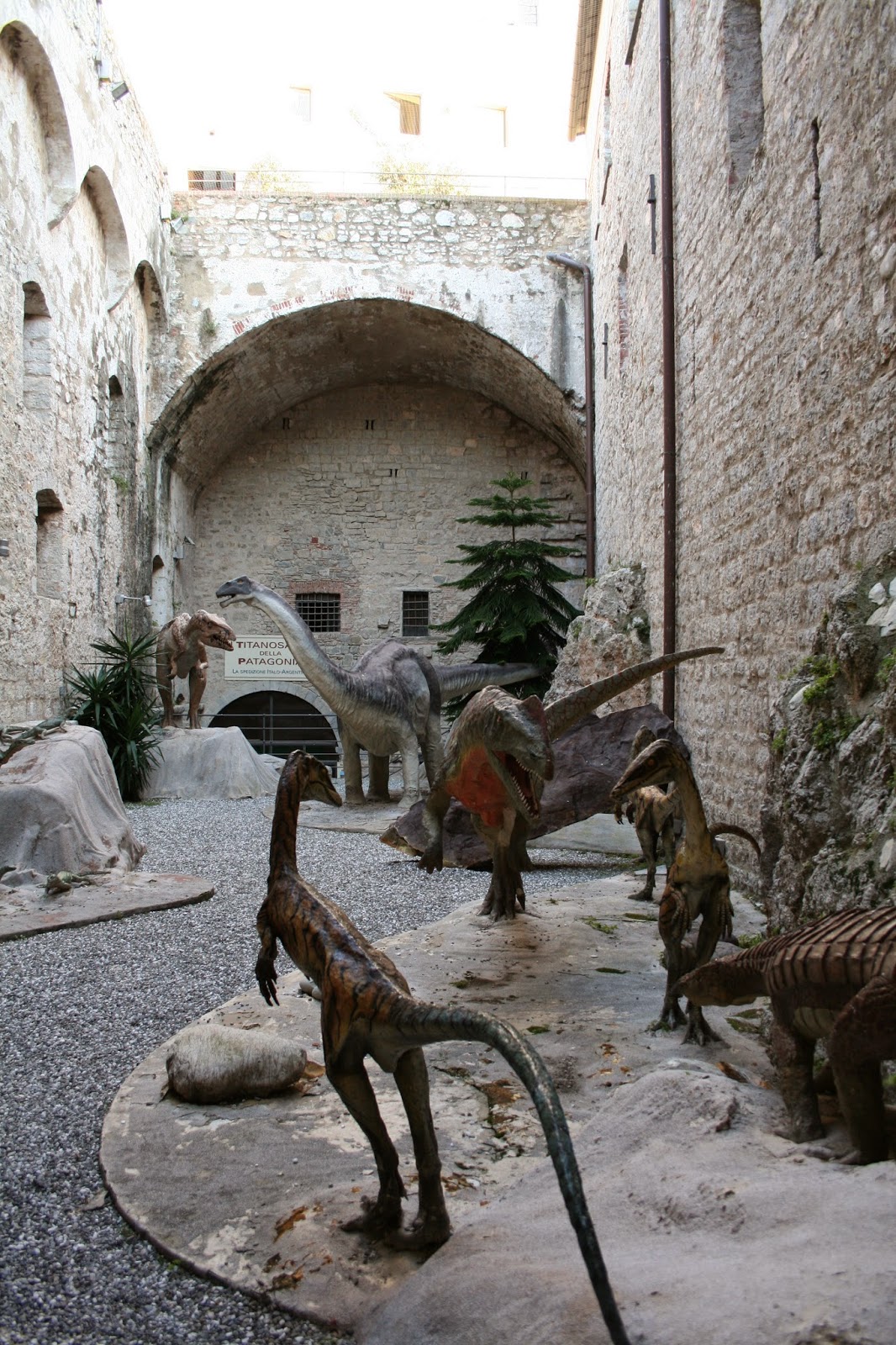 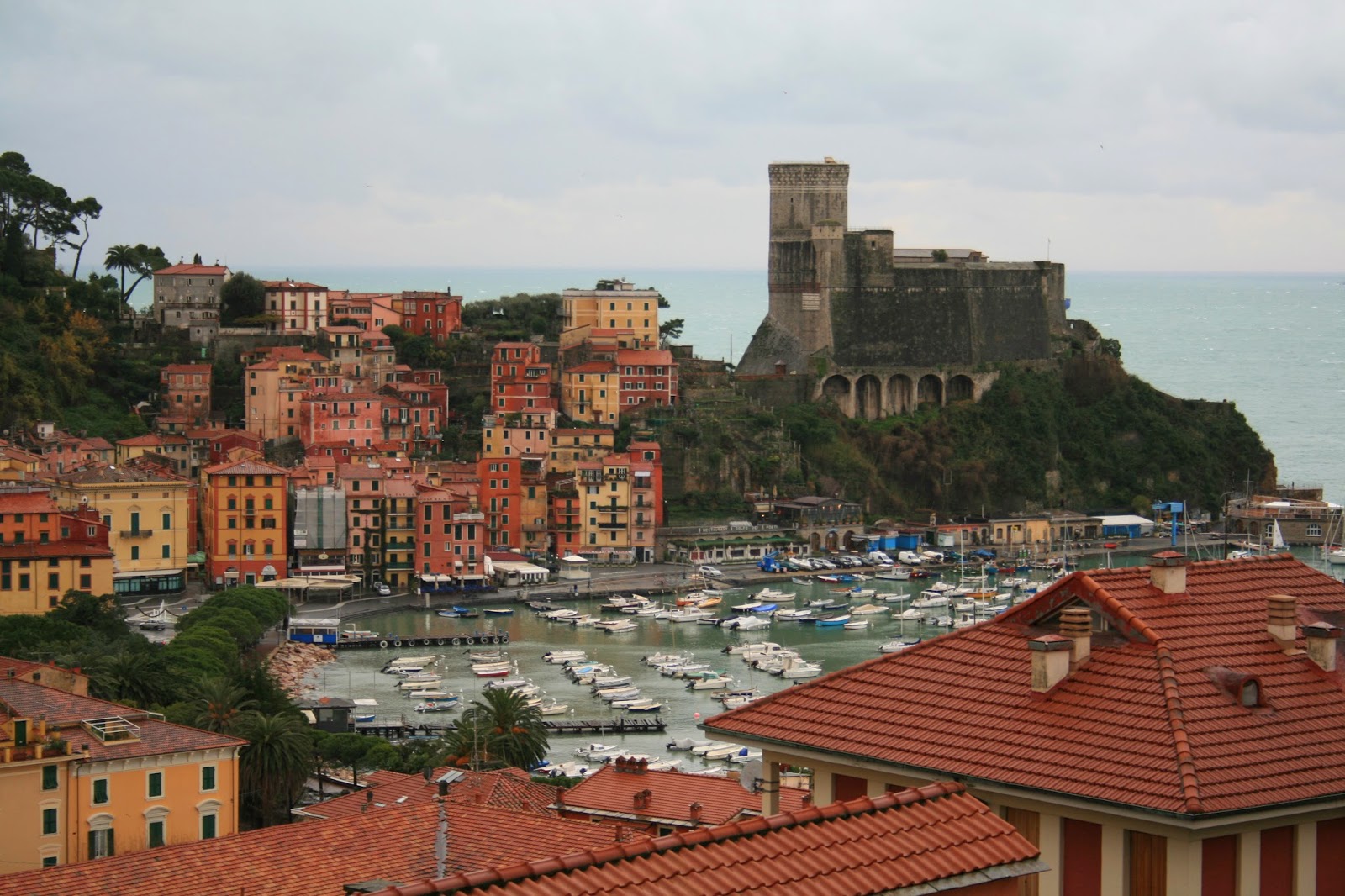 I wasn't sure about the ROM Crystal at first, but it's grown on me: 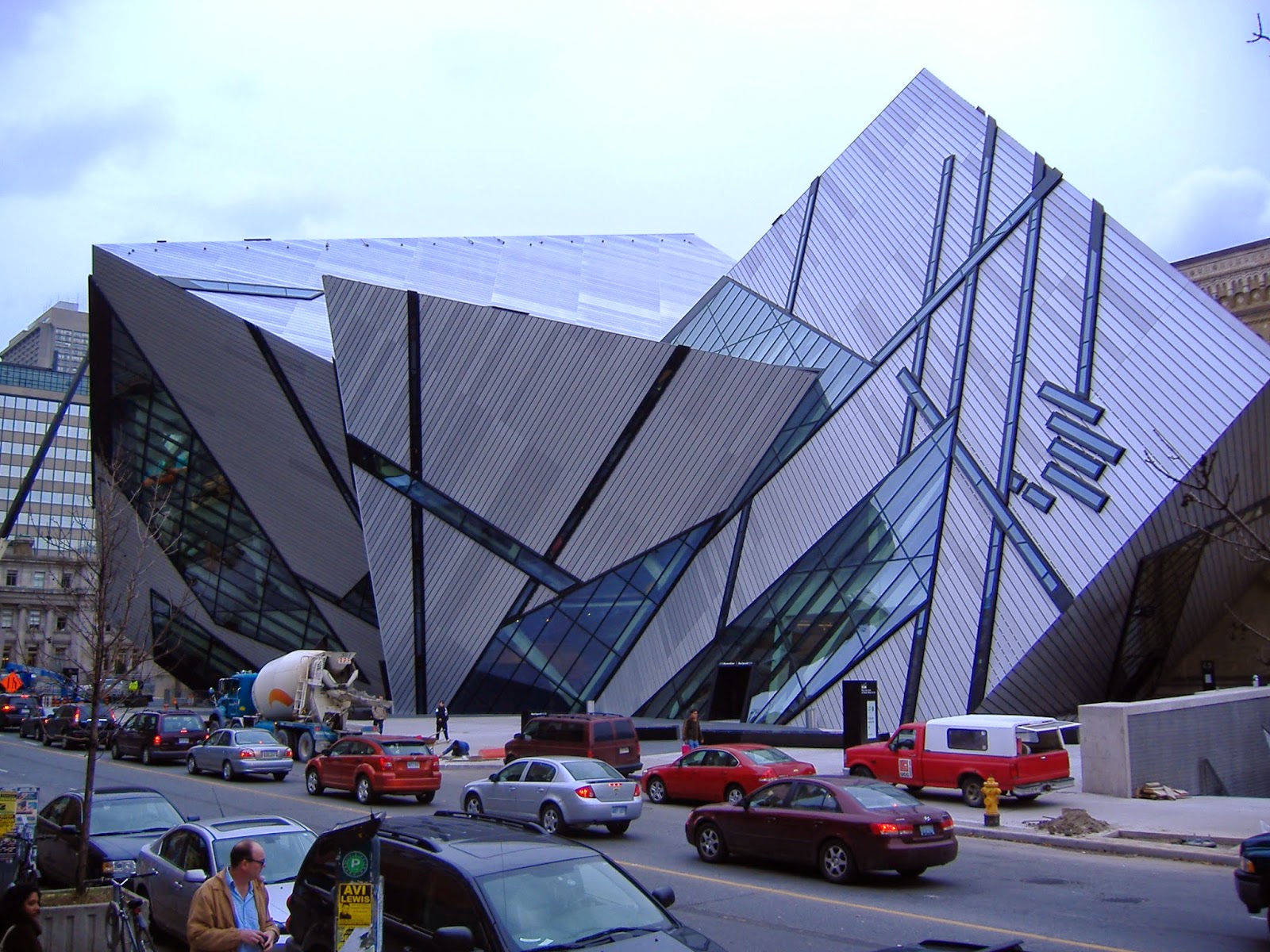 And I think the SECU Daily Planet at the NC Museum is pretty swell (on the inside, it's a theatre!): 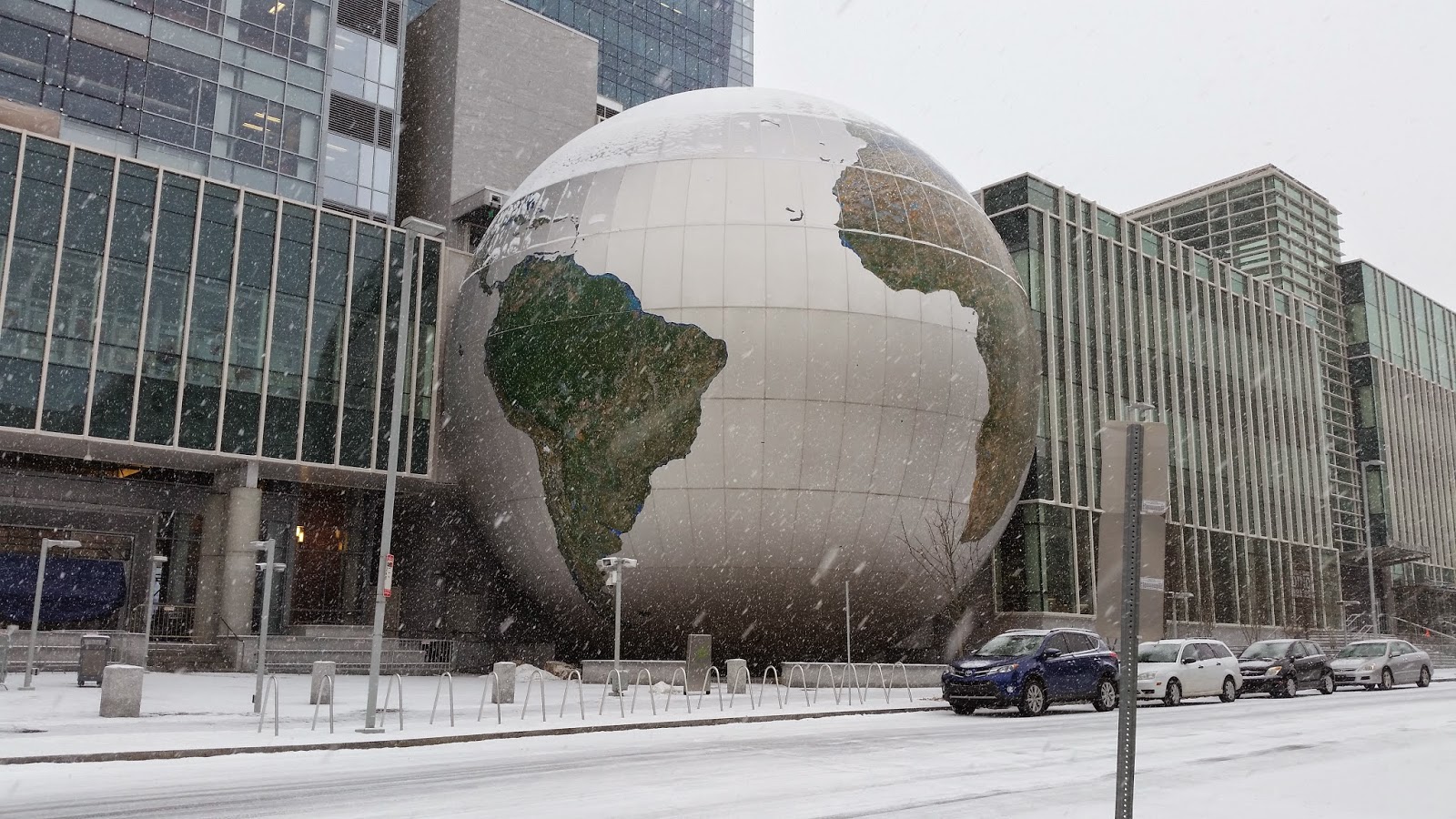 Day 4: Inspiration
Some non-dinosaur stuff for inspiration day: I really like learning about Canadian art and its history, and one of my very favourite museums on the entire planet is the Museum of Anthropology at the University of British Columbia. If you're in Vancouver, DO NOT MISS THAT MUSEUM. It's an emotional experience to step into the exhibits at this museum and be surrounded by so much creativity and history and skill. Here's a sample to sharpen your brain. 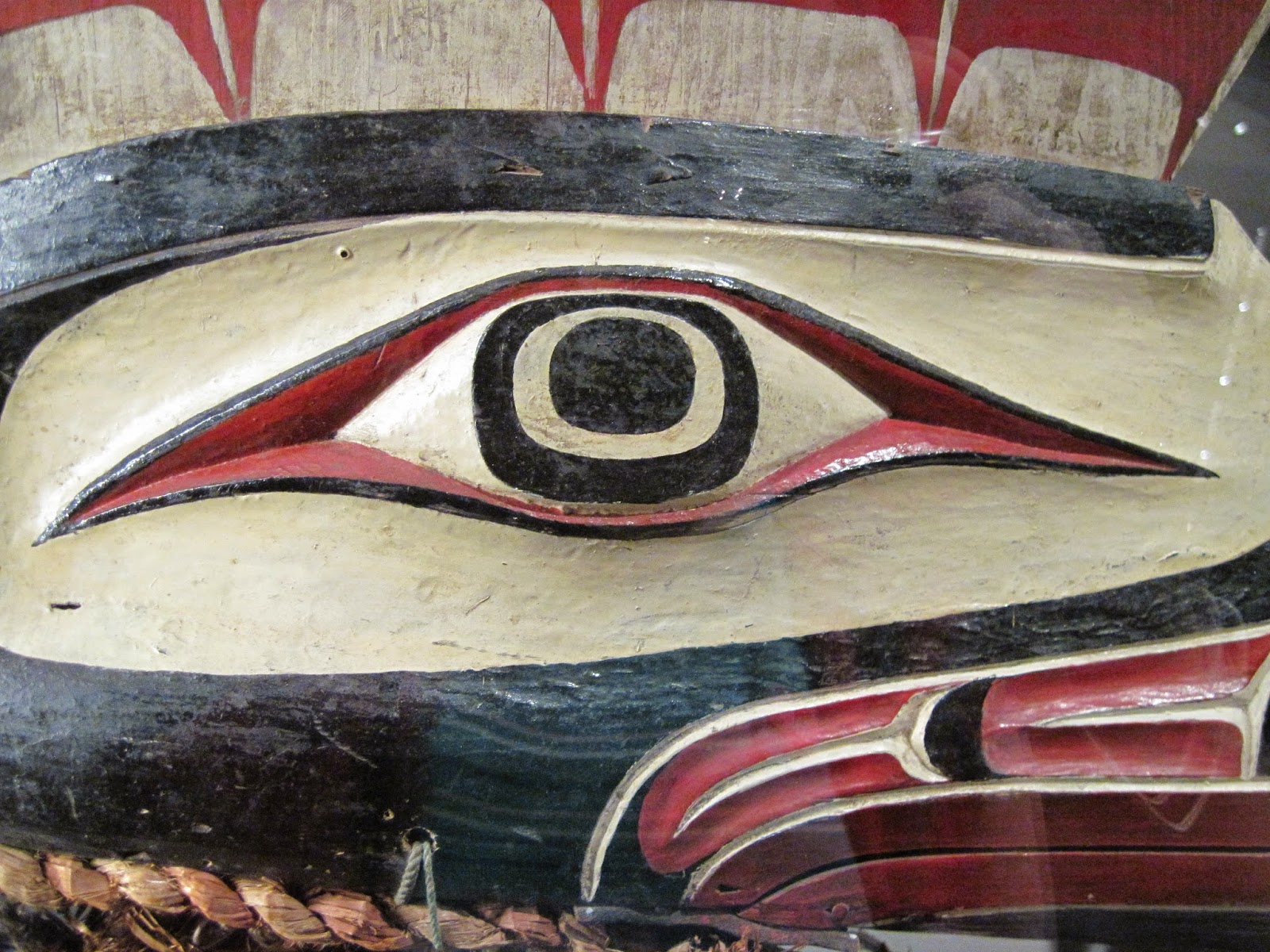 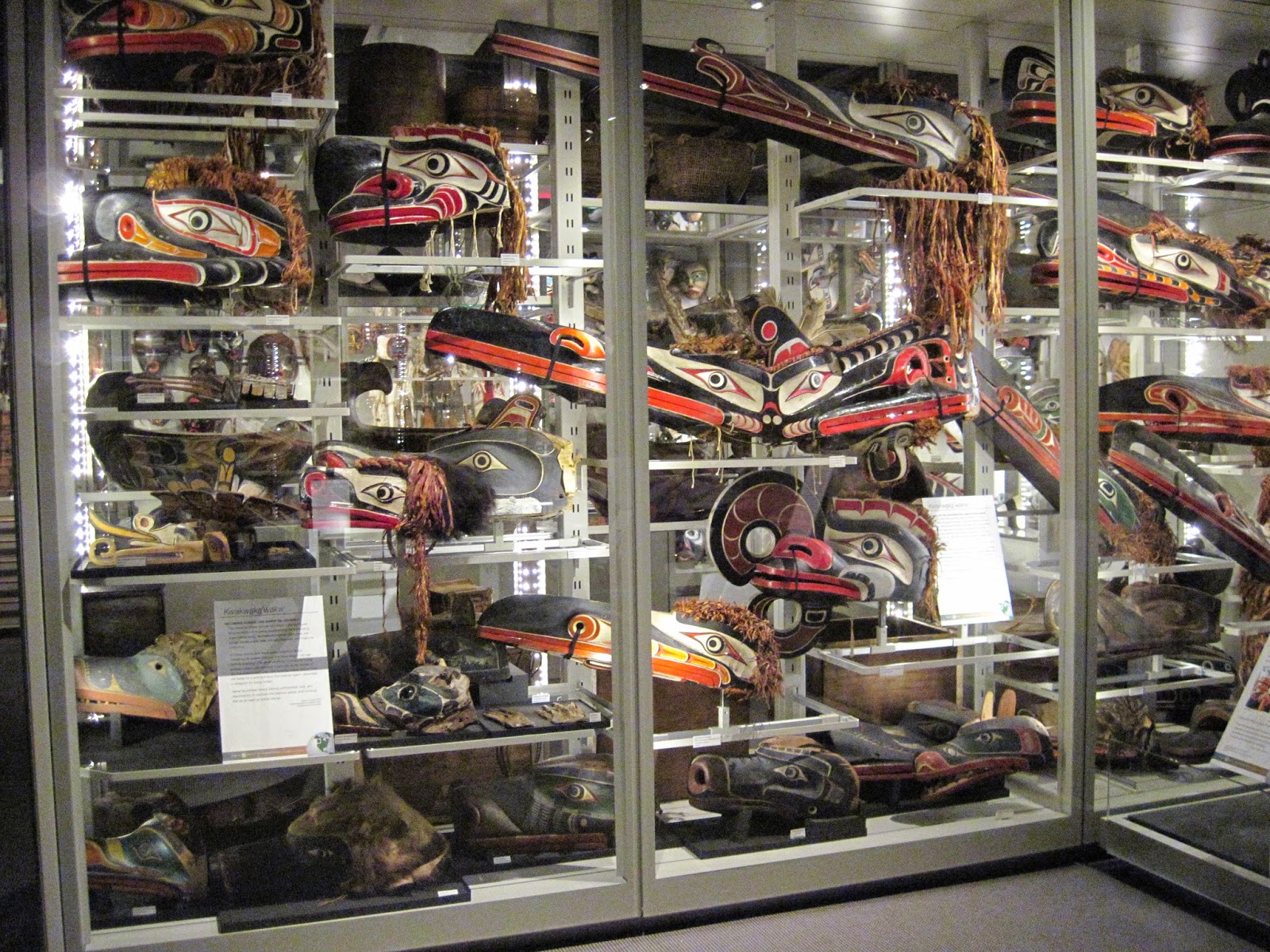 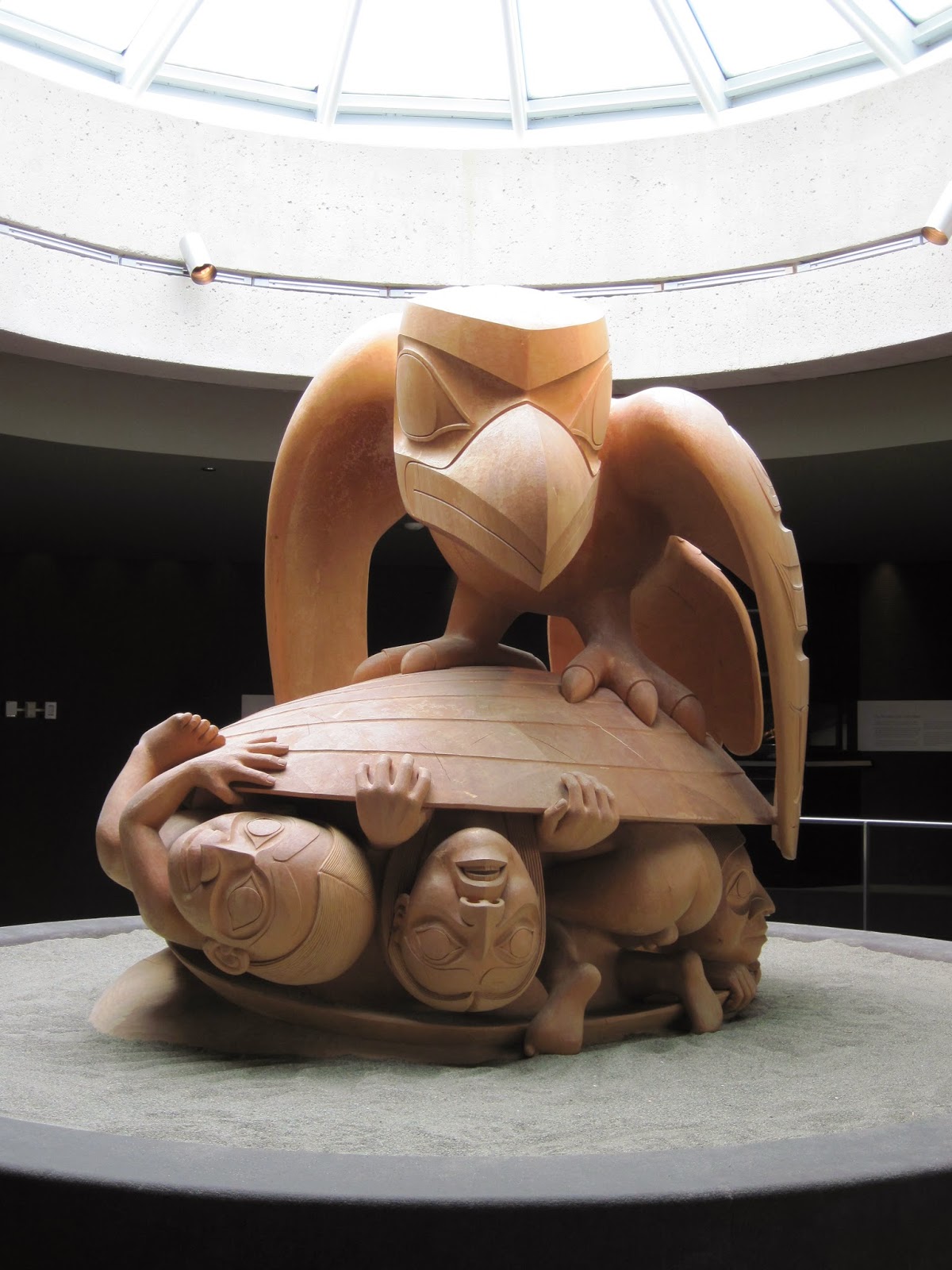 Day 5: Family
I'm lucky to have had great parents that fed my dinosaur obsession as a kid with trips to museums near and far. I'd love to dig out some photos from the before time, but for now, I'll leave this day for my own memories. What are some of your favourite museum memories from your childhood?

Day 6: Favourites
I like busy museums that are crammed full of stuff, especially when that takes the form of a Wall of Stuff or a Hall of Stuff. Here's a few of my favourites. 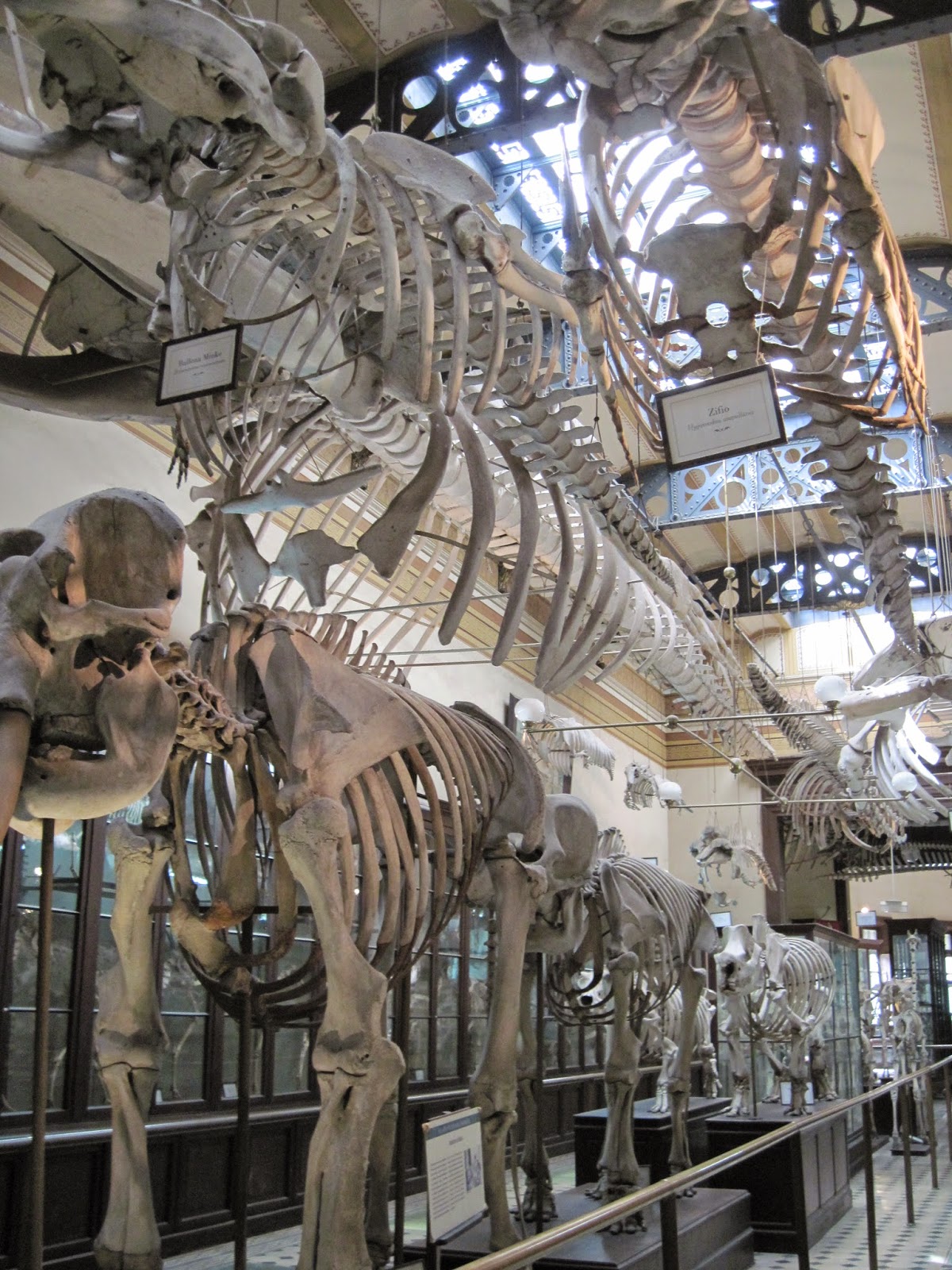 Hall of Stuff at the Museo de La Plata 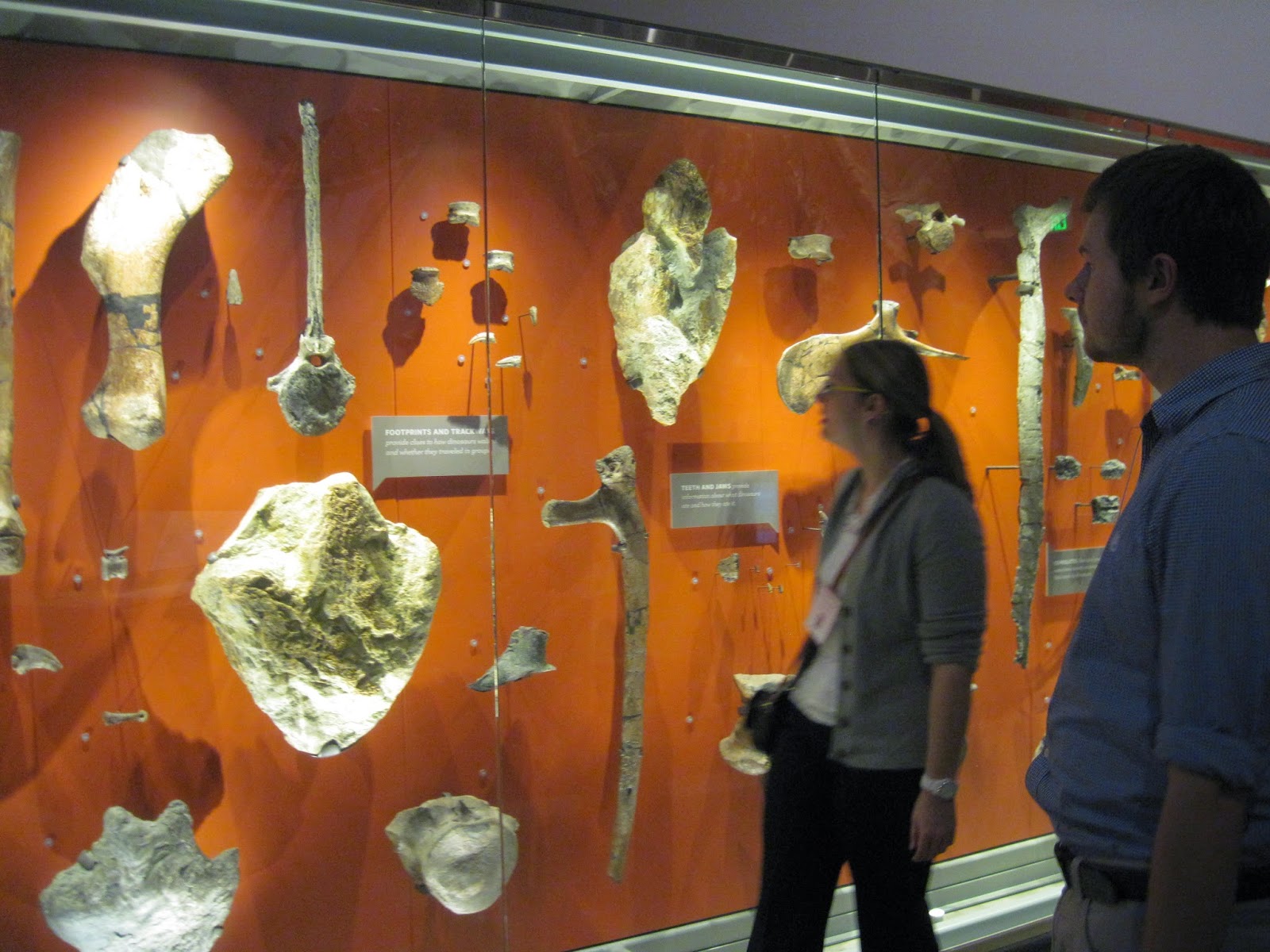 Wall of Stuff at the Natural History Museum of LA County


I don't like posting pictures of myself very much, so I'll just include one here to finish off: here's Pinacosaurus (nee "Syrmosaurus") at the museum in Moscow, with me for scale. 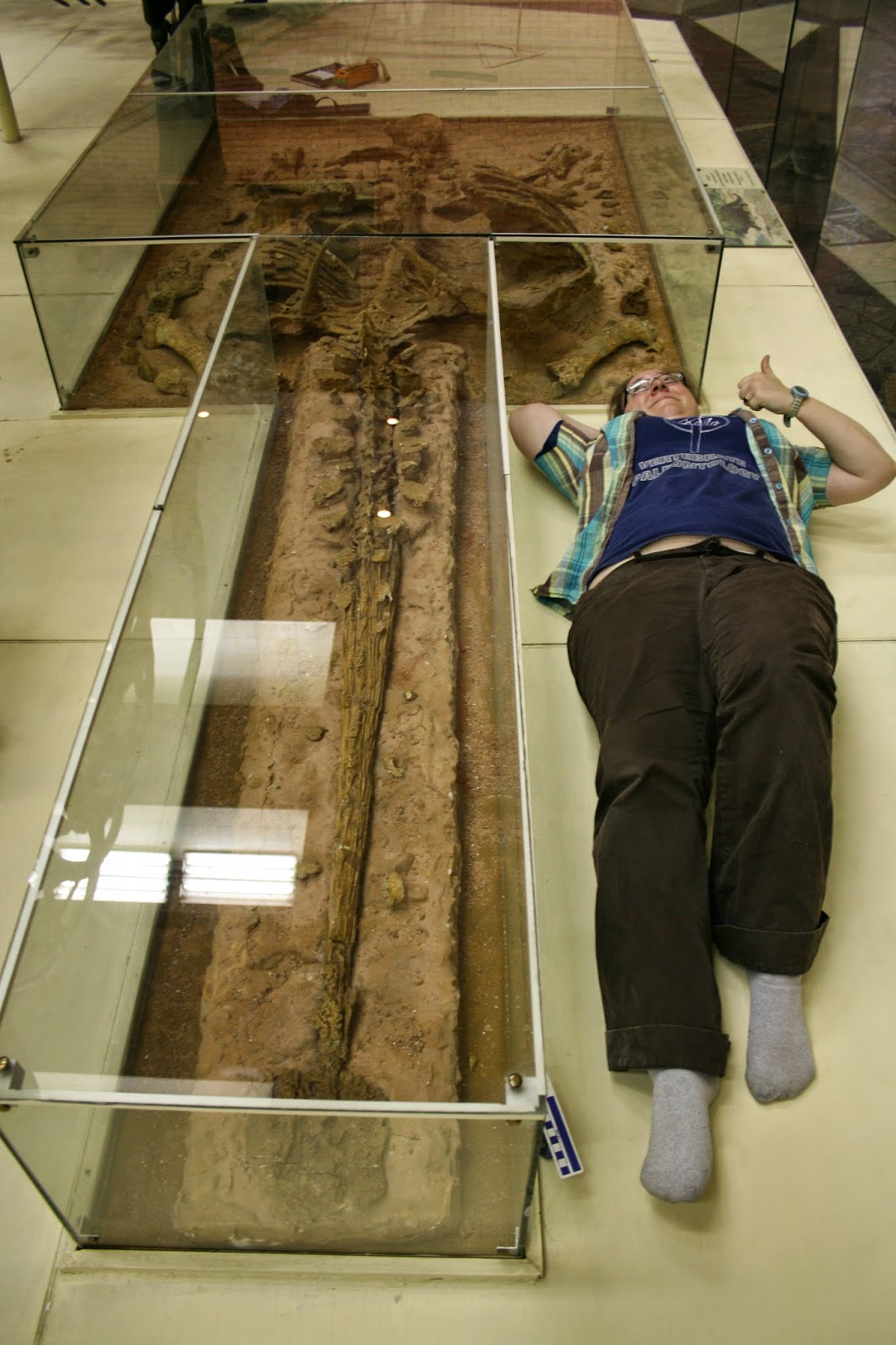 That's it for now! What did you share for Museum Week?
Posted by Victoria at 8:44 PM No comments: Links to this post