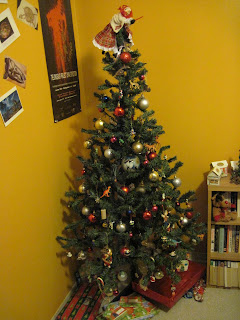 But what's that lurking in the plastic foliage? 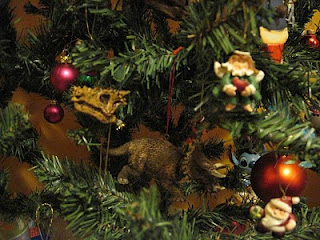 Why, it's a tree composed of 80% small plastic dinosaur ornaments! How lovely!
(The remaining breakdown is 10% hilarious cellphone charms, ironic because neither of us have cellphones, and 10% real ornaments given to us by our families [at least 40% of which are Disney-related in some way].) 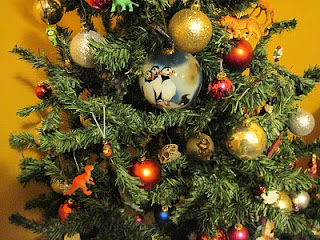 You may wonder why a festive witch adorns the top of the tree. In Italy, Santa Claus was not really a big deal until after World War II - before then, Christmas gifts were given not on Christmas Day, but on the Epiphany, and were delivered by La Befana. Last Christmas I got my very own Christmas Witch complete with sack full of delicious candy. 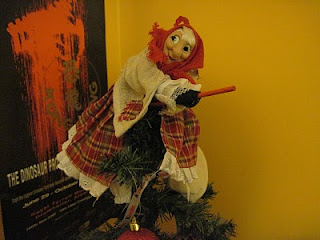 Pete and I have been having a lot of fun transforming dollar store plastic animals and dinosaurs into Christmas ornaments. I also had a great set of really cool dinosaur skulls from a Safari Toob, which turned into AWESOME decorations. The set included traditional Christmas favourites such as Triceratops, Tyrannosaurus, Diplodocus, Brachiosaurus, Velociraptor and Parasaurolophus, the slightly more obscure Carnotaurus, Dilophosaurus, and Oviraptor, and the newcomers Nigersaurus and Dracorex! Isn't that neat? 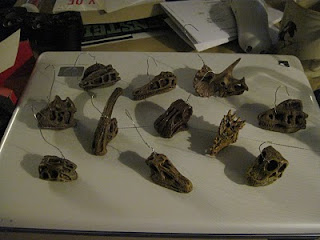 Are you getting festive with dinosaurs this year?

***and yes, I realize it's pretty early for a tree. But we had these awesome ornaments, and we were excited, and besides, why not?

Posted by Victoria at 1:28 AM 2 comments: Links to this post

I'm happy to announce the publication of another new Korean dinosaur, Koreaceratops, by my friends and colleagues Yuong-Nam Lee, Michael Ryan, and Yoshi Kobayashi. 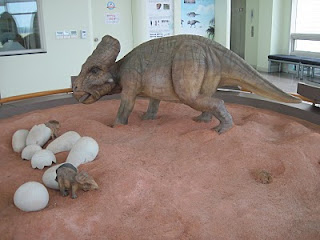 This little fellow was actually discovered very close to where I spent much of my summer this year, at Jeongok Harbour in Hwaseong-si (somewhat close to Jebu-do). Koreaceratops is diagnosed by some features of the ankle as well as the tall, deep tail. It's a beautiful specimen even though it lacks a skull - here's hoping that a head is found sometime! 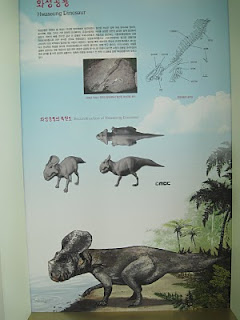 The Dinosaur Egg Visitor Centre in Songsan has a nice model of a protoceratopsian with eggs and hatchlings, which I suppose we can now call Koreaceratops! There's also a bit of information on the specimen, although the actual fossils are not on display. You can, however, take a look at some fossil eggs both in the centre and a short walk away in situ.


I also wanted to post some pictures of the other Korean dinosaur named a few weeks ago, Koreanosaurus. I love the life reconstruction that was made for this guy! 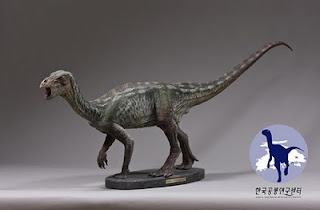 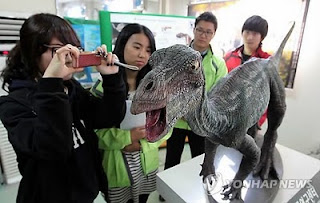 Posted by Victoria at 1:34 PM 4 comments: Links to this post

In addition to visiting the Royal BC Museum last week, I also spent a bit of time wandering around Victoria. It is a very pleasant city and it was nice to wander near the ocean again, even if only for a day. 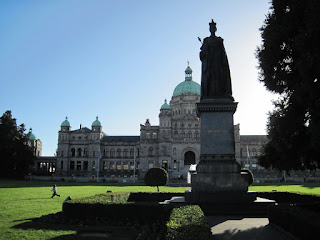 Hey! That person has the same name as me or something. 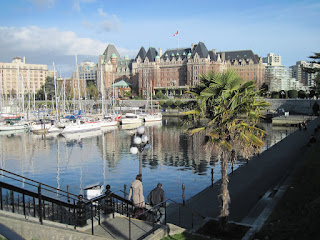 This is the Fairmont Empress Hotel, something of a landmark in Victoria. Also note the presence of a palm tree in Canada. 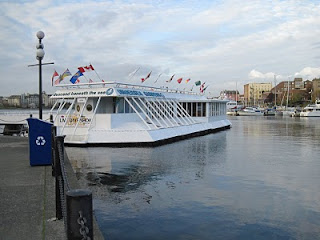 I stopped by the Pacific Undersea Gardens, which seems to have bad reviews on a lot of tourist sites, but that I rather liked. You go down a cool tunnel and view fish in what is essentially a fenced-off portion of the harbour. It's all sealife that can be found in the area, so they aren't necessarily as showy as tropical fish, but it was very interesting. There were lingcod, spiny rock cod, a silvery school of salmon, anemones, bright purple starfish, and kelp. The neatest part of the experience is the live theatre, where every hour a scuba diver enters part of the tank at one end of the boat and shows off crabs and starfish, feeds the fish, and plays with the amazing wolf eel (named Eli) and giant pacific octopus (named Armstrong).


Here's some video I took of the dive show! I was very excited to see the octopus. This was the first time I've seen a live octopus that I wasn't about to eat.

Email ThisBlogThis!Share to TwitterShare to FacebookShare to Pinterest
Labels: invertebrates, not work, sightseeing

I found myself in Victoria, British Columbia for the day, and spent some time wandering around the Royal BC Museum. Although many people don’t associate Vancouver Island with abundant fossils, there are many palaeontological treasures to be had...here’s a few highlights: 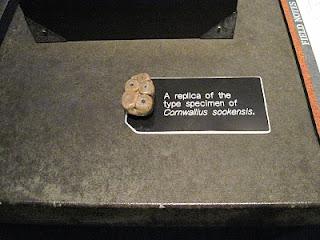 This unusual bleb of rock is actually a tooth from a very strange type of animal called a desmostylian, and this species is called Cornwallius. There’s nothing really like desmostylians today. They’re related to proboscideans (elephants) and sirenians (manatees), but look more like hippos crossed with sea lions. They lacked flippers but lived an aquatic lifestyle. Here’s Wikipedia’s interpretation of what they looked like: 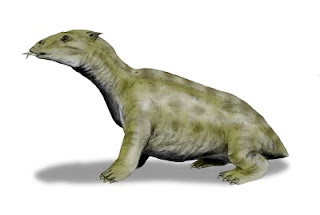 In short, they are highly unusual animals that certainly do not get enough play in the land of palaeo promotion. (Also, I may have a new favourite genus name – a related animal called Vanderhoofius. So awesome!) Cornwallius is a desmostylian from the Sooke Formation of Vancouver Island. Some Cornwallius specimens from Vancouver Island have even made their way into the Smithsonian... 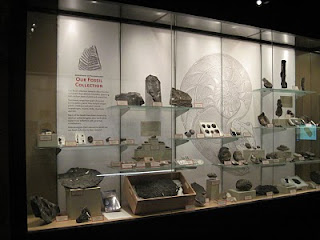 Elsewhere in the museum is a nice temporary exhibit showcasing the ‘behind the scenes’ aspect of museums, with lots of interesting specimens on display from each of the Natural History departments. 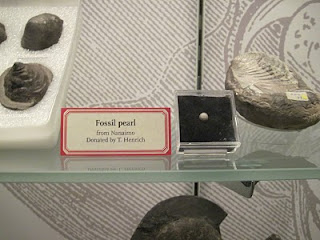 Something I had been wondering about for some time was whether or not pearls could fossilize, and if so, why we weren’t finding them in the fossil record. I now have an answer – they CAN, and we DO. How neat is that?


And finally...mammoth! With real ice! 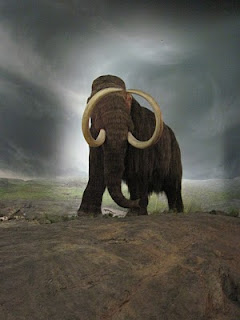 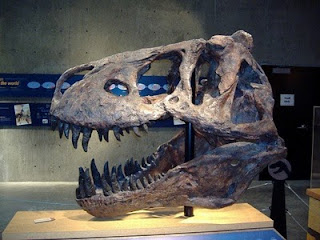 The T. rex Discovery Centre in Eastend, Saskatchewan (home of the Royal Saskatchewan Museum Fossil Research Station) is participating in the Pepsi Refresh Challenge, which could ultimately give them $100 000 for renewing their galleries. The centre is home to Scotty, perhaps the largest (or at least, most robust) Tyrannosaurus ever collected.

Although they have some excellent skulls and models on display, the T. rex Discovery Centre does not have any complete skeletons, and this is what they would like to purchase if they win the Pepsi Challenge. They are hoping to add a dromaeosaur and a Thescelosaurus to the galleries, to better represent the Saskatchewan dinosaur fauna.


Please help them out by voting daily at the Pepsi Refresh Challenge website - you need to sign up, but you won't be registered for Pepsi spam. The project with the most votes will receive the money. 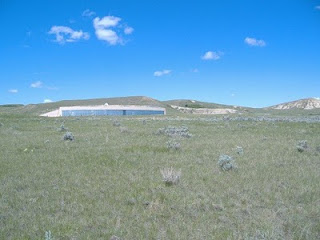 The T. rex Discovery Centre is built into the side of a hill, with beautiful big windows illuminating the gallery spaces. 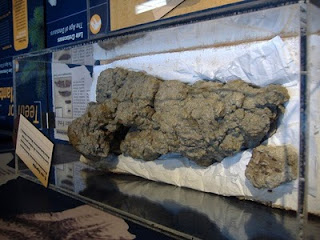 And where else, may I ask you, can you see the world's largest coprolite? Yes indeed, this is a half metre long Tyrannosaurus poo - you can read the Nature paper describing it here.
Vote for the project and throw Scotty a bone - they're good folks over there.

I was in Mongolia when this story originally appeared in the news, but I like it too much to not mention it here on the blog.
Last August, Edmonton city construction workers were digging a new sewer tunnel when they discovered dinosaur bones! My fellow ankylosaur worker Mike Burns, and Don Brinkman from the Royal Tyrrell Museum helped out at the site for about two weeks, excavating bits and pieces of Edmontosaurus and Albertosaurus. In particular, some awfully nice Albertosaurus teeth were found. 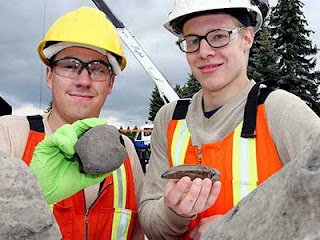 Image from the Edmonton Sun.

Mike has mentioned that it was a lot of fun to get lowered down into the tunnel each day. I suspect this was quite an unusual excavation experience - we don't usually work deep underground when digging up dinosaurs!

Overall, the material looks quite similar to a bonebed we've been excavating in the south of Edmonton for the last several years - dark black shales, and dark black bones. There's a good chance there's dinosaurs underneath us everywhere in Edmonton, but they're covered up by trees and roads and buildings and such.

Recent update in the Edmonton Sun.

Original articles at the National Post and CBC News.

A nice slideshow can be seen at the Edmonton Sun.

And there's a short video about the find at the Toronto Star.
Posted by Victoria at 12:48 PM 1 comment: Links to this post