I've finally got the time and gumption to sit down and write again, so let's do some research blogging! And let's show some skin while we're at it!

The first paper I'll talk about is not one that I'm lead author on, but which was a really fun project to be involved in. This was the description of a super cool specimen of a hadrosaur from the area around Grande Prairie with some impressive skin impressions. UALVP 53722 was collected as a large block that had fallen along the creekside. Unfortunately, the rest of the skeleton could not be located, which might mean it's still in situ somewhere with nothing visible, or it had already broken apart into unrecognizable pieces. The block preserves the back of the skull with the neck arched over the shoulders, the classic 'death pose' seen in many dinosaur skeletons. Most of the skull is missing, but what is present shows that it is an Edmontosaurus regalis, the slightly older species of Edmontosaurus. 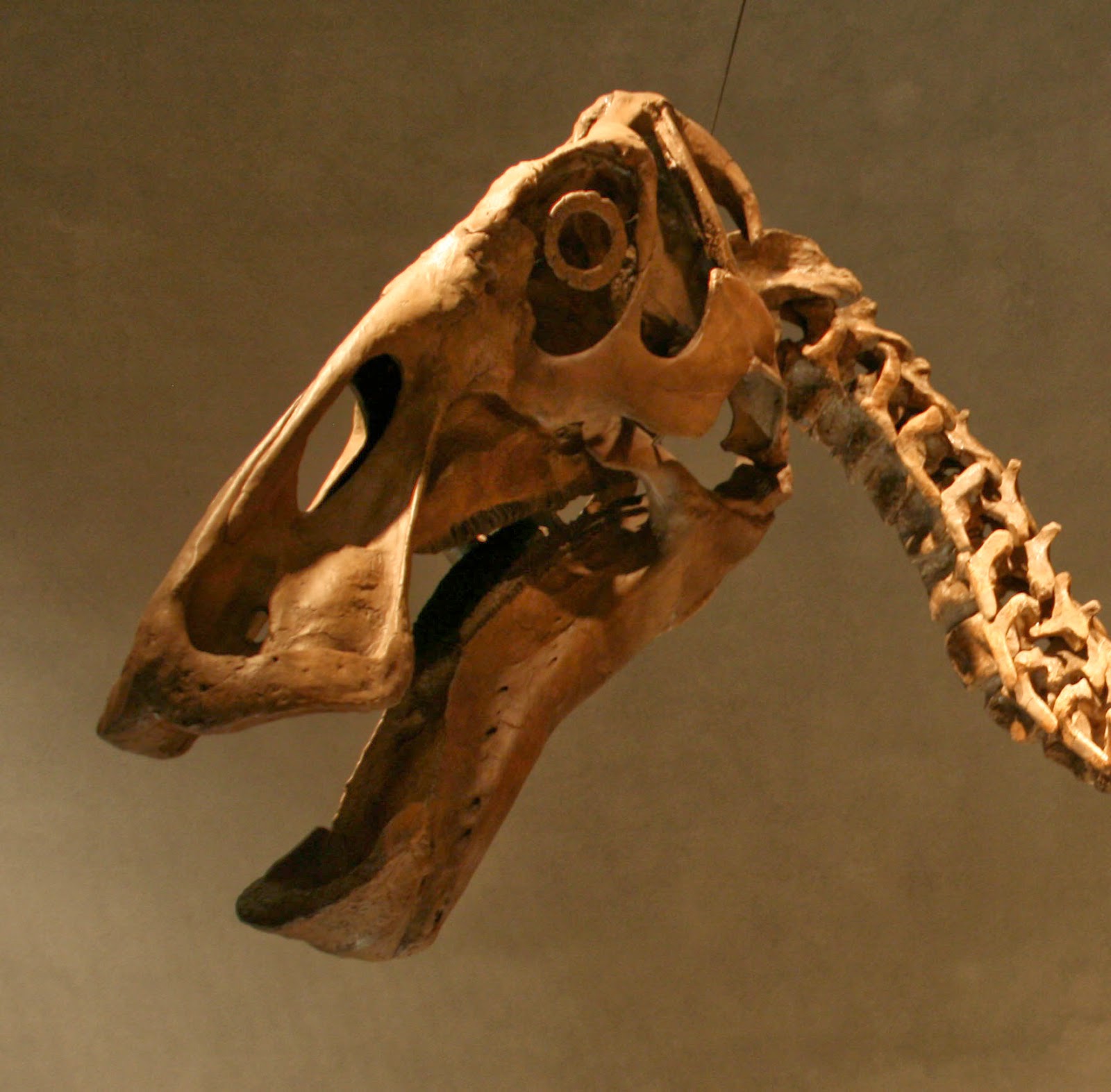 Flat-headed Edmontosaurus at the Denver Museum of Nature and Science.

And sitting on top of the skull is a round, relatively smooth lump of soft tissue, like the comb on a rooster's head.

My primary contribution to the paper was to examine the CT scans of the specimen to confirm that there wasn't a bony structure within the crest, so that we could be confidant that it truly was a soft tissue structure only. The UofA put together a short video about CT scanning the fossil that is worth a watch:

The fleshy comb in UALVP 53722 the first time we've seen anything like this in a dinosaur, and was totally unexpected – Edmontosaurus is one of the 'flat-headed' hadrosaurs that lacks the bony crest characteristic of lambeosaurines like Corythosaurus or Lambeosaurus. I love this discovery because it is such a great example of how much soft tissues contribute to the appearance of an animal. It also goes to show how a new fossil, even for a relatively well known dinosaur like Edmontosaurus (which is known from many skeletons and bonebeds) can still give us new information. 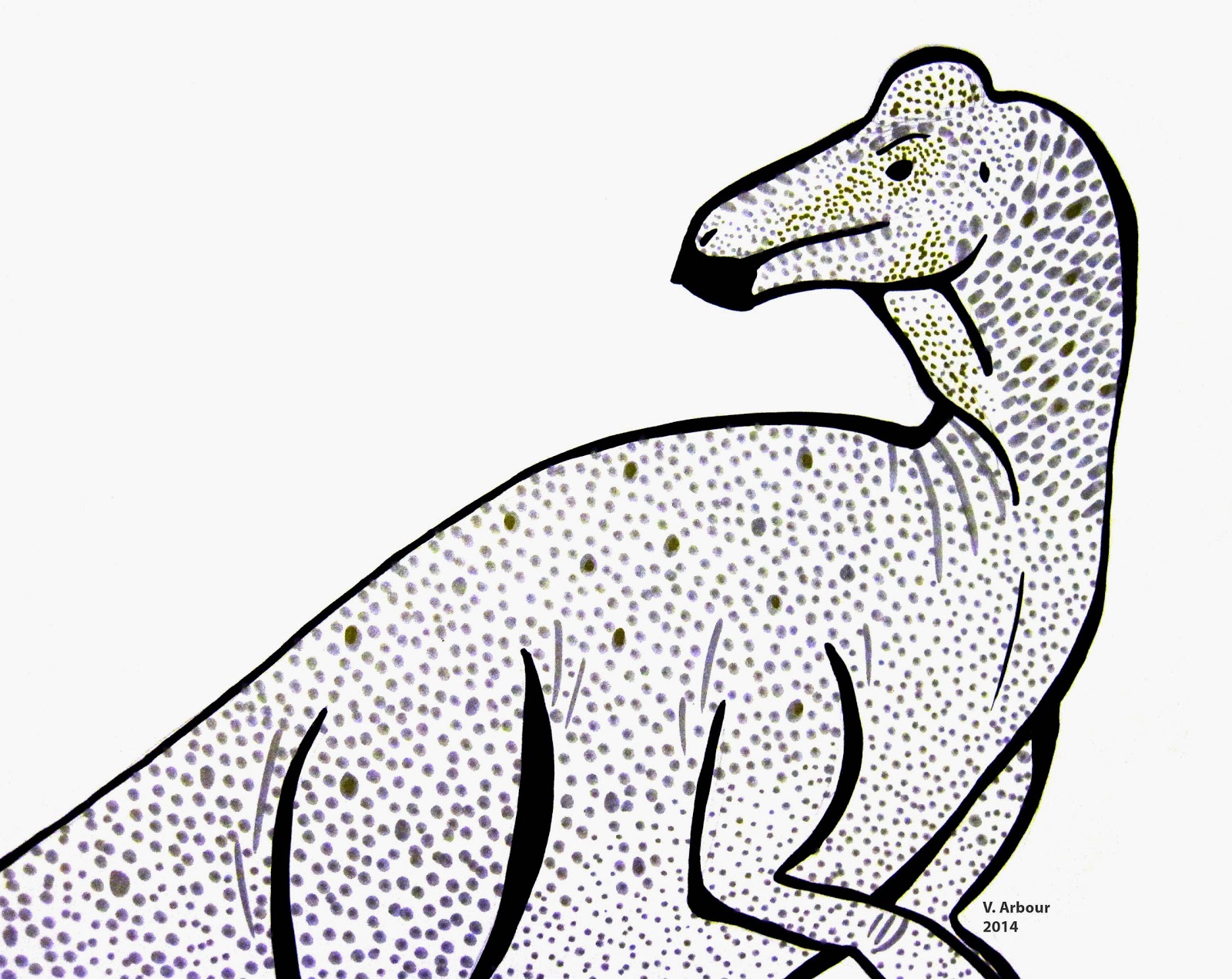 Crested Edmontosaurus based on UALVP 53722.

I was also a big fan of the book "All Yesterdays", and I feel like this specimen kind of fits in with some of the more adventurous reconstructions of dinosaurs with elaborate soft tissues that have become more fashionable of late. And like all good discoveries, we end up with more questions that need to be answered: did all Edmontosaurus regalis have this fleshy comb, or was it restricted to adults, or even just adult males? If males and females both had the comb, was it larger in one sex than the other? Was it brightly coloured? Did Edmontosaurus annectens have a fleshy crest? We'll only be able to answer these questions with more specimens.

Anyway, go check the paper out! UALVP 53722 was on display in Edmonton for a short time earlier this year – stay tuned for more information on where it will be on display next! Many thanks to Phil Bell (a former Currie Lab student and now at the University of New England in Australia) for inviting me to help out with this paper.

And for those who are extra keen, here's my Quirks & Quarks radio interview from January 2014.
Posted by Victoria at 12:39 AM