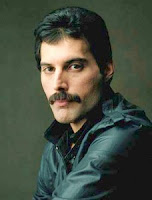 Baron von Nopcsa is a pretty cool dude, maybe even as cool as Freddie Mercury. Born in 1877 in Transylvania, he is probably best known for his work on the Haţeg fauna of Romania.

Nopcsa also published a lot of papers on ankylosaurs! 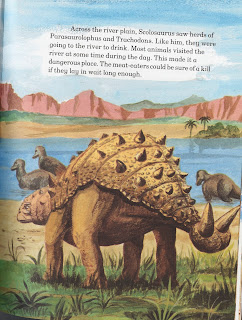 Like SCOLOSAURUS!
(This image is from an awesome book I found at WalMart – the Colossal Book of Dinosaurs)

If you’ve ever visited the Natural History Museum in London, then you’ve seen Scolosaurus cutleri (now considered Euoplocephalus tutus) – it’s at the entrance to the Dinosaur Hall. It is perhaps the best preserved ankylosaur, and certainly the best from North America, with all of the armour in situ but sadly lacking the skull and tail club. IMPORTANT NOTE! If you see a reconstruction of a spike-tailed ankylosaur like the one above, it is WRONG! And unfortunately this spiky-clubbed reconstruction traces back to von Nopsca’s original description of Scolosaurus in 1928, which includes a drawing of a stub-tailed, spiky-clubbed Scolosaurus. Why is this so? Well, BMNH R5161 is missing the tail club completely, from the front of the handle right back to the knob. The midpoint of the tail got kind of smushed, and there are two large spikes at that point, so this area was misinterpreted as the end of the tail. And voila, a spiky tail club is born. The spiky-clubbed ankylosaur causes me endless dismay.

Most reconstructions of Euoplocephalus use BMNH R5161 as the basis for the armour – whenever you see a generic plastic ankylosaur toy with two big spikes on the shoulders and two big spikes at the midpoint of the tail, you’re looking at BMNH R5161.

Nopcsa was not just keen to describe new species and specimens, but to figure out how these animals worked. Although nowadays we don’t really think ankylosaurs were primarily insectivorous animals, I love the following passage in the Scolosaurus description.

"Both in Euoplocephalus and in Struthiosaurus the quadrate is remarkably feeble and this was probably also the case in Panoplosaurus...therefore one must conclude that their food must have been rather soft. The teeth of these animals are frequently more or less reduced, the food they took was therefore not even cut to pieces. The claws of Scolosaurus show no special fossorial adaptation, the food of Scolosaurus was therefore not dug up out of the ground, thus Scolosaurus evidently did not live on subterranean bulbs. It did not live in a marshy country, therefore soft aquatic plants are also excluded as food, hard desert plants are naturally still more excluded and even succulent desert plants could not be dissected. Surely its immobility prevented Scolosaurus from procuring its food by running to and fro and all this limits the nature of its food to a great extent. The result is that insects are the single sort of food that has seriously to be considered.


As many recent deserticolous reptiles are insectivorous, one may suppose that the same was also the case in Scolosaurus. The insects that abound nowadays in deserts are Coleoptera, Orthoptera and Neuroptera. All these groups are known from precretaceous times. Especially Orthoptera occur in arid regions occasionally in tremendous swarms and they supply sometimes great quantities of food."

Nopcsa then goes on to calculate how much food Scolosaurus would need based on figures from zookeepers feeding captive reptiles, and ends the discussion with the following:

"One large grasshopper weighs about 2 gramms, so Scolosaurus could have lived on even less than 7000 grasshoppers and beetles a week."

Even though this may not seem to be the best interpretation today, I think it’s really important to recognize Nopcsa’s treatment of Scolosaurus as a living animal – he wanted to know what it ate, how it survived, and then he sat down and wrote out his reasoning in a pretty clear manner.

The end of Nopcsa’s story is a tragic one: in 1933, following financial difficulties that led to him selling his fossil collection to the Natural History Museum in London, he shot Bajazid and then himself.

Grigorescu (2010) provides an excellent biography of Baron von Nopcsa, especially his activities in the Haţeg Basin:


Grigorescu D. 2010. The Latest Cretaceous fauna with dinosaurs and mammals from the Haţeg Basin – A historical overview. Palaeogeography, Palaeoclimatology, Palaeoecology 293:271-282.