Growing up in Nova Scotia, despite its many excellent and significant palaeontological treasures, meant that there weren't many dinosaur fossils for me to gawp at regularly. The Nova Scotia Museum of Natural History (which I loved) had only a few small fossils on display, and besides an exciting appearance by the Dinosauroid when I was small, did not have any big traveling dinosaur exhibits come through. But when I was in Grade 1 or so, DINAMATION came to town and seared its robotic dinosaurs all over my brain forever. And so I think I will forever have a soft spot in my heart for animatronic dinosaur displays. 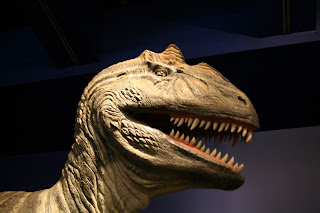 Mike Burns and I ran into some of the old Dinamation robots puffing away at the New Mexico Museum back in 2012!


Like Jurassic Forest and Dino Dino Dreampark, the traveling exhibit Dinosaurs Unearthed (at Telus World of Science in Edmonton for the summer) mostly features large animatronic dinosaurs, as well as some casts and interactive displays.

One of the main focuses of the exhibit is showcasing Chinese dinosaurs and fossils, and talking about recent research on the evolution of birds from dinosaurs. Probably one of the best parts of the exhibit is the large number of casts of feathered dinosaurs from China, including Sinosauropteryx, Caudipteryx, Microraptor, and Confuciusornis. These are still not particularly household names, so it's nice to see these on display, especially given the lack of feathers in Jurassic World's dinosaurs! 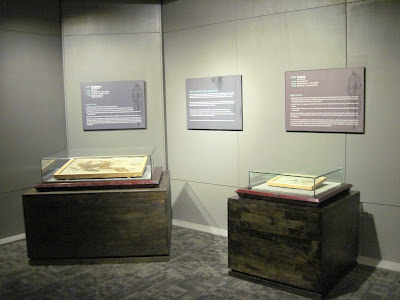 Just past the casts we have a diorama of Jehol Biota feathered dinosaurs, including (from left to right) the dromaeosaur Microraptor, the compsognathid Sinosauropteryx, the tyrannosaur Dilong, and the bird Confuciusornis. Some of the animatronics are better than others, and all are kind of weirdly oversized, but I think if there was a sign that said this was a diorama at 4x life size or something like that, that it would work pretty well. 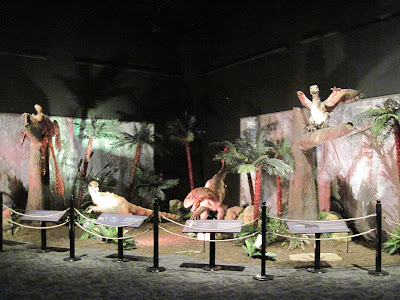 My favourite cluster of dinosaurs was the set of Mongolian dinosaurs, including the first time I've ever seen Gigantoraptor anywhere! There's also a pretty dapper Alxasaurus in the front there. 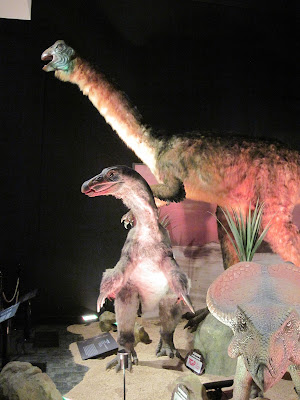 I would have liked to see more cast fossils rather than sculpted reconstructions, and perhaps more fossils overall and a couple fewer animatronics. But generally the information presented in the exhibit was pretty good and had been recently updated, with references to the new research on Brontosaurus, and lots of recent behavioural, biomechanics, and ecology facts as well. Here's a nice display showcasing some of the cool imaging work done by the WitmerLab! 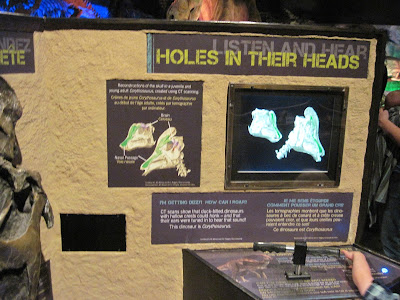 Until next time...watch out for that Shantungosaurus as you leave! 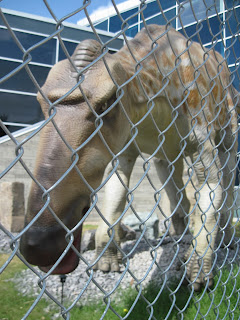