Why does Jurassic World hate dinosaurs?

I have some Thoughts and Feelings about Jurassic World! Spoiler alert, I'm going to talk about details and plot points and this post is really for people who have seen the film. Also, while I'm going to talk about the dinosaurs a bit, this isn't really a review of the science of the film, because that's already been done to death. Ok, onwards and upwards into something that wound up being way too long! 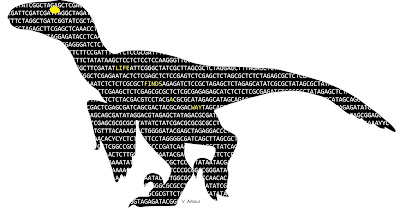 I think the answer to that question is yes. Jurassic World keeps making these little homages and throwbacks to the earlier films (there are lots of shots that echo iconic moments in the earlier films, and some of the plot points mirror the original film almost exactly), and yet I feel like we could consider the theme of Jurassic World to be about rejecting nostalgia and childhood. It's buried under an interesting discussion of the role of the military in funding scientific research, and why some kinds of research are prioritized over others, and it may actually be unintentional, but it's the theme I took away most immediately from this film.

There are two characters that I think are supposed to represent the audience, and neither are treated particularly well by the other characters. And by 'the audience', I'm going to be really self-centered and say that I mean the 30-somethings like myself who saw the original film when we were in that 8-12 year old bracket, or 'peak Jurassic Park' age, and who this film is clearly pandering to. Firstly, we have Gray Mitchell, a 10-ish year old who represents us when we first saw Jurassic Park: he's a dinosaur geek and is one of the only characters to show unrelenting enthusiasm for dinosaurs while visiting Jurassic World. Secondly, we have Lowery, the 30-something computer room dude, who wears an original Jurassic Park shirt and has dinosaur toys on his desk and is obviously super into the dinosaurs in the dinosaur theme park. He is us, now, grown up and nostalgic for the original film. Multiple times throughout the film, Gray's older brother tells him he needs to grow up, and points out that many of the things are for little kids. Claire makes fun of Lowery's shirt, and I think in general we're supposed to think he's kind of a weird man-child who hasn't really grown up.

There's a moment in the film where Gray and his brother Zach stumble upon the old Jurassic Park visitor center building. The T. rex cast skeleton lies on the ground covered in vegetation, and a little piece of the "When Dinosaurs Ruled the Earth" banner is visible. Zach uses it to make a torch so they can investigate the rest of the suspiciously-well-lit ruins. Visiting the old building felt like some gratuitous fan-service to me, but then burning the banner felt like a purposeful statement about rejecting the nostalgia of the original film.

Jurassic World is constantly setting up little nostalgic moments and then seemingly stomping all over them. It's like the filmmakers wanted to pay tribute to Jurassic Park but then were embarassed to show that they liked it – or maybe they didn't really like that movie at all, but wanted to make lots of money (success!). I don't know, but I find it thematically problematic and a bit sad, since the excitement over DINOSAURS! in the first movie is one of the defining aspects of that film, and that sense of wonder and grandeur has rarely been replicated. Jurassic World feels jaded, and like it's too cool for dinosaurs.

Can we talk about ladies in this movie for a moment?

Did we really need to introduce our main female character with the camera sweeping up her legs to her face? Was that absolutely necessary? Also, could we just not use the 'frigid, uptight workaholic woman needs to learn to loosen up and become sexually free with a man, and also needs to remember that all women will have children eventually' stereotype? COULD WE JUST NOT?

It's an intriguing throwback to the original Jurassic Park movie, which I feel successfully used the kids as a character development point for Alan Grant. But Sam Neill managed to portray Grant's discomfort with kids in a more organic way, and the movie gave that plotline a bit of breathing room to develop during some of its quieter moments AND its action sequences (see: sitting in the tree feeding Brachiosaurus; escaping the falling car in the tree; the fence). It's less believable with Claire Dearing, because she doesn't even spend any time with the kids in peril until almost the very end of the movie, at which point she basically worried herself into liking kids? Or something?

Look, not every movie is going to have (or should have) a Strong Female Character(TM), because there are lots of ways to be a lady just like there are lots of ways to be a dude. But the first two Jurassic Park movies had some cool female characters: Ellie Sattler, a palaeobotanist, who was brave and curious and smart! Lex Murphy, who knew those UNIX systems! Sarah Harding, who was a bit foolish but was also brave and curious! Kelly Curtis Malcolm, who gymnastic-ed a Velociraptor to death! In Jurassic World, we get a woman who has great power and authority (she runs a theme park full of dinosaurs!) being told she should be different at almost every opportunity, and we get a distracted babysitter who is killed in the most gratuitous, drawn-out sequence of all. Thanks, movie.

Other palaeontologists have already beaten me to much of this, but I still had a few thoughts I wanted to share. Ultimately I don't have a big problem with the 'retro' dinosaurs of 1993 appearing in this film, because I'm willing to go with the flow in terms of continuity. But there were some pretty dumb things in this film:
· The pterosaur sequence was pretty godawful and brought the action to a screeching halt. I can't suspend disbelief that the pterosaurs would immediately rampage and murder a bunch of people, and I can't suspend disbelief over the physics of that sequence. Refrigerating that babysitter lady was also pretty awful. Sweet jeepers, Jurassic World, you're going to make me say something horrible: this sequence was better in Jurassic Park III. THERE. I hope you're happy.
·  I never really bought Indominus rex as anything more than a really big Allosaurus or Saurophaganax. (Sorry, theropod people! Allosaurus is cool, but not, like, THAT cool.) I did, however, like the incorporation of the camouflage idea from the Carnotaurus in the Lost World book, something that I had missed from the film adaptation. Overall, I'm frustrated that Indominus exists mostly so they had a dinosaur they could trademark. Because that's totally what that is, and everything else is secondary to that, including its incorporation into the plot.
· That mosasaur is just so gigantic. I'm on board, but that was starting to stretch credulity as well.
·  Why doesn't Rexy eat Blue after the fight? The mind boggles.

Ok, things I liked!
·  The Ankylosaurus gives Indominus the old what-for and doesn't immediately die like everything else! Indominus needs to really work at murdering that poor fellow. The design of the Ankylosaurus themselves is pretty terrible (wrong osteoderms, tail too curly, nostrils in the wrong spot, head generally a bit off), although I think it's meant to be consistent with Jurassic Park III.


·  Dinosaur petting zoo! It should be for all ages!
· The big kaiju battle between Indominus and Tyrannosaurus was pretty well matched. I liked the little kick to JPIII when the Tyrannosaurus busts through the Spinosaurus skeleton on the way to the fight.
·  "Are they safe?" "Oh no, under no circumstances, not even a little."

Some final Thoughts and Feelings 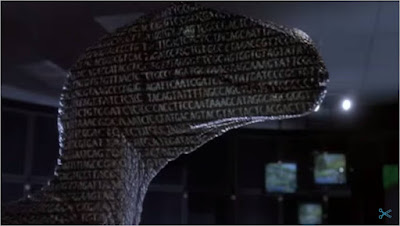 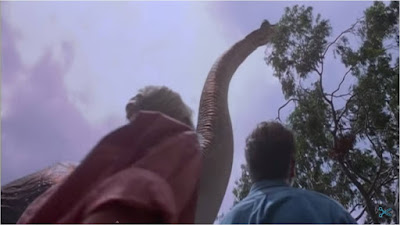 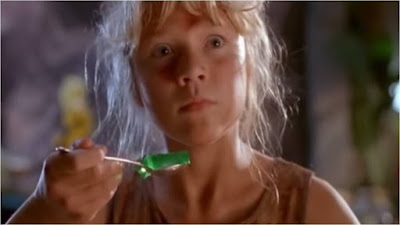 And I miss the yellow and green and red colour palette of the original park, replaced here with chrome and blue and silver like every other washed out movie in theatres lately. It is also interesting that all of the big sweeping themes from the original soundtrack are used not for the dinosaurs, but for the manmade structures of the park itself. It really does feel like Jurassic World doesn't care about dinosaurs.
Posted by Victoria at 11:35 AM