Ankylosaurs by the sea

Ankylosaurs, like probably most other dinosaurs, were landlubbing, terrestrial animals without obvious aquatic adaptations. And yet, surprisingly, their fossils are found in marine sedimentary environments more often than most other dinosaurs (except hadrosaurs). Some, like Aletopelta, wound up in shallow or lagoonal environments - Aletopelta's carcass became a reef! - but some, like the Suncor nodosaurid, wound up far away from shore. 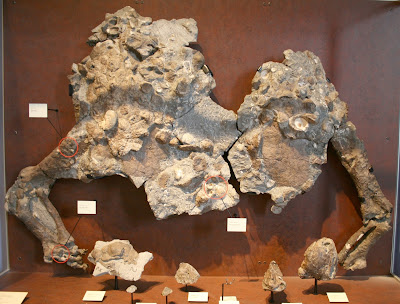 Aletopelta! See if you can spot the oyster marks, invertebrates, and shark teeth around the pelvis and legs.

I wanted to look into this phenomenon in a bit more detail than it had been investigated previously, and with my work on ankylosaurid phylogenetics and biogeography published last year the time was right to dive into marine ankylosaurs. I added in more taxa into my ankylosaurid character matrix to check whether there were any secret ankylosaurids hiding in the taxa I didn't previously include. 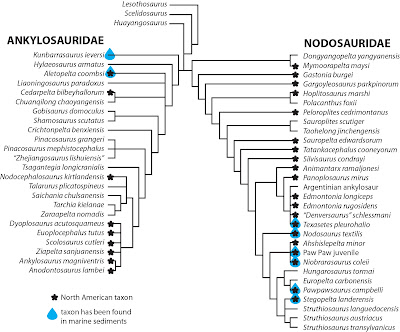 Surprisingly, Hylaeosaurus popped out as a basal ankylosaurid in this analysis, an intriguing result that I think needs further investigation but could be really interesting. Mostly everything else that should be a nodosaurid was a nodosaurid, and I got surprisingly good resolution in the Nodosauridae, but take the interrelationships there with a tiny grain of salt given that I didn't make any new characters for this analysis and the existing character set is geared towards ankylosaurids.

Next up, I downloaded a dataset of all the ankylosaur occurrences in the Paleobiology Database and went through each entry (more than 500!) to verify whether or not the specimens were ankylosaurids, nodosaurids, or if we couldn't tell for sure, and their depositional environment. With that data in hand, we wanted to know what the geographic distribution of ankylosaur marine occurrences looked like, and here it is: 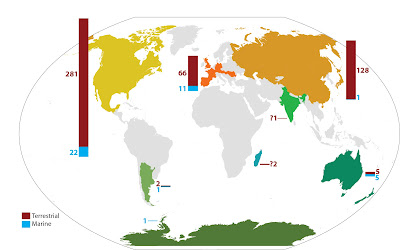 Lots of ankylosaurs in the northern hemisphere, not so many in the southern hemisphere. More than half of marine ankylosaurs occur in North America, which is perhaps unsurprising given that North America had a bad habit of being underwater for a lot of the Cretaceous. When we exclude indeterminate occurrences, we get an ankylosaurid-nodosaurid marine-terrestrial split that looks like this: 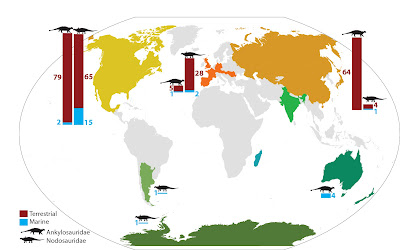 In North America and Asia, the distribution of ankylosaurs in different environments is statistically significant, but it isn't in Europe (and remember, Hylaeosaurus hasn't previously been found as an ankylosaurid so there might not even be ankylosaurids in Europe). 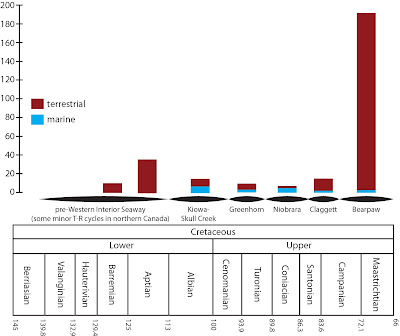 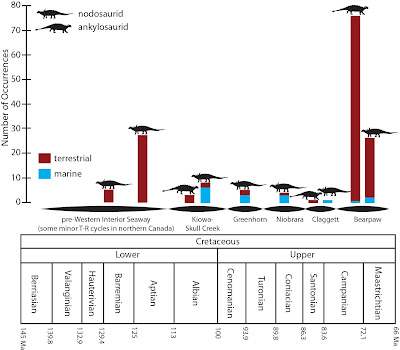