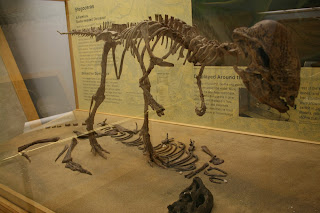 I've always thought of Stegoceras as an unofficial mascot for dinosaur palaeontology at the University of Alberta. The best Stegoceras skeleton ever collected is UALVP 2 (that's right, 2! 1 UALVP 1 is a turtle), shown here on display in our museum in the Earth Sciences Building. The actual recovered bones are displayed below the mounted skeleton. It's a beautiful skull, and pachycephalosaur postcranial material is extremely rare. 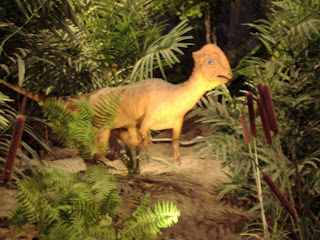 Stegoceras makes an appearance at lots of museums all over North America. Before this corner of the Royal Tyrrell Museum was converted into the new ceratopsian exhibit, it featured a diorama including a fleshed out Albertosaurus, Edmontonia, and Stegoceras. 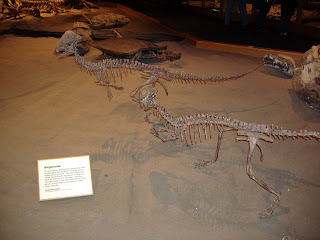 You can still see these two Stegoceras skeletons at the Tyrrell. 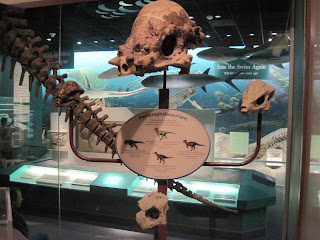 Email ThisBlogThis!Share to TwitterShare to FacebookShare to Pinterest
Labels: Alberta, pachycephalosaurs, Royal Tyrrell Museum, Smithsonian, the literature, U of A