Who-oplocephalus: Everything old is new again.

Over the last few posts, I've talked about why Euoplocephalus tutus is a valid genus and species, how the Horseshoe Canyon Formation ankylosaurid is really Anodontosaurus lambei, and how the headless and clubless holotype of Scolosaurus cutleri is most likely the same species as the ankylosaurid from the Two Medicine Formation. Here's a diagram summarizing some of the key points from the paper. 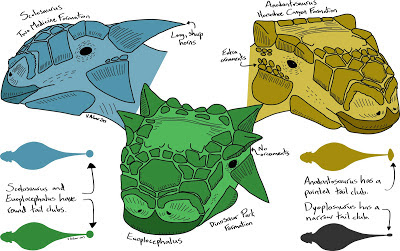 One ankylosaur I didn't talk about in the previous posts was Dyoplosaurus acutosquameus, an ankylosaurid long synonymized with Euoplocephalus tutus but resurrected by me and my colleagues Michael Burns andRobin Sissons back in 2009.

The holotype of Dyoplosaurus, ROM 784, is another really nice specimen, consisting mostly of the back half of the animal (although a fragmentary skull is also preserved). Dyoplosaurus differs from Euoplocephalus in the shape of the hooves on the hind foot (which are more triangular than in other ankylosaurs), and in some aspects of the pelvis. The tail club knob is very narrow compared to almost all other tail clubs from the Dinosaur Park Formation, although it's not entirely clear how much of this is related to ontogeny versus taxonomy. Do tail clubs start off narrow and become increasingly wider as the animal grows? Or do they maintain approximately the same proportions and just increase in size? The sole tail club knob for Scolosaurus is about the same width as in ROM 784, but the knob is round and about as long as wide. If knob proportions changed as they got bigger, we'd expect knobs of the same width to have about the same length:width ratio, but that isn't the case between TMP 2001.42.9 and ROM 784. We'll need more specimens in order to really test this hypothesis, but for now I'm tentatively considering the narrow tail club knob of Dyoplosaurus to be a characteristic of that genus. And because of that, there is one other isolated tail club that may be referable to Dyoplosaurus – UALVP 47273, a specimen I CT scanned and used in my biomechanics of tail clubbing project. 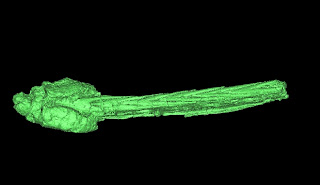 Digital model of UALVP 47273 from CT scans, made using Mimics. 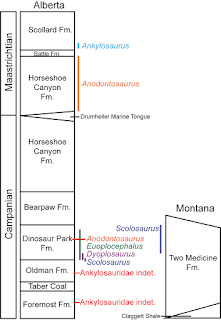 Campanian-Maastrichtian ankylosaurids from Alberta and Montana, from Arbour and Currie (2013).

So, where do I go from here? Well, for my PhD dissertation I'm trying to better understand the evolution of ankylosaurid dinosaurs, and so knowing who all of the players are is really essential for constructing a revised phylogenetic tree. Understanding variation in cranial ornamentation in Euoplocephalus will also help me understand which other ankylosaur species are valid or need to be synonymized, or maybe even identify some new species. I also now know that tail club shapes are at least somewhat taxonomically informative, and this leads to questions about function and behaviour. If there really are three ankylosaurid species in the lower Dinosaur Park Formation, what does that mean for niche partitioning among similar large herbivore species? Why does Scolosaurus appear in the geologically older Oldman Formation, disappear, and then reappear in the younger upper Two Medicine Formation? Does this reflect habitat preferences in ankylosaurid species? As usual in science, answering one question leads to many more.

I've also had some people asking if there's anything going on with the Albertan nodosaurid ankylosaurs. My fellow grad student Mike Burns is currently working on the nightmare of taxonomy that is Edmontonia longiceps, Edmontonia rugosidens, Panoplosaurus mirus, and various combinations thereof. I'm looking forward to seeing what he comes up with! And of course, don't forget that the Royal Tyrrell Museum collected an astonishingly good nodosaurid (probably) fossil from Early Cretaceous marine sediments near Fort McMurray, Alberta, in spring 2011. If you're visiting the Tyrrell this summer, you can see parts of it being prepared in the lab.

Tomorrow I am off to Dinosaur Provincial Park for a brief bit of fieldwork, including, hopefully, a search for the Scolosaurus quarry. Wish me luck, and hopefully there will be even more ankylosaur news over the next couple of months. 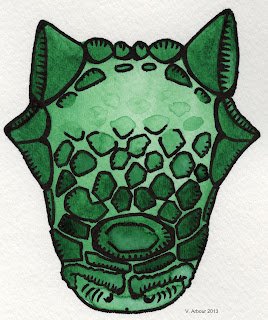 Arbour VM, Currie PJ. 2013. Euoplocephalus tutus and the diversity of ankylosaurid dinosaurs in the Late Cretaceous of Alberta, Canada, and Montana, USA. PLOS ONE 8:e62421.