With the identification of UALVP 31 as a specimen that could be confidently referred to Euoplocephalus based on the shape of the cervical half ring, I now had a pretty complete skull, and some postcranial material, to help expand our knowledge of Euoplocephalus. 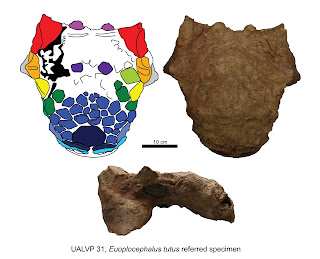 The Euoplocephalus skull UALVP 31. From Arbour and Currie (2013).


The top of the skull of UALVP 31, and the holotype CMN 0210, is covered in small flat polygons. In some ankylosaurs, like Saichania and Minotaurasaurus, these polygons bulge upwards from the skull. One of the things I wanted to know was whether or not the shapes and patterns of these polygons could be taxonomically useful. Many previous authors have said the distribution of polygons in at least some regions of the skull is random, but was it really? One problem is that there hasn't been a consistent nomenclature for these polygons, and it's also unclear what their developmental origin is. Are the polygons fused osteoderms, like in the skulls of gila monsters, or are they formed from sculpturing of the skull bones, like in crocodiles? 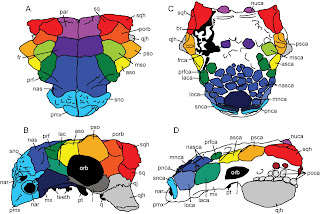 Ooh, labels. The 'ca' in the abbreviations usually refers to caputegulum. From Arbour and Currie (2013).

To get around the osteoderm-vs-sculpturing problem, I decided to use a term that was coined back in 2001 by William Blows, but which had not caught on in the literature: caputegulum. Caputegulum means 'skull tile', and neatly removes any developmental origin from the descriptive aspect of comparing the polygon patterns among skulls. I compared Euoplocephalus skulls to juvenile ankylosaurs which had visible cranial bone sutures, so I could figure out which bones the caputegulae probably belonged to. Some caputegulae had been given names before – like the supranarial caputegulae or the median nasal caputegulum – but others are new for this study, like the lacrimal and loreal caputegulae. By naming the caputegulae, it is easier to compare them.

This is where having a large (and by that I mean 'large') sample size for this study was essential. If wanted to understand how the caputegulae patterns and shapes varied in Euoplocephalus, I needed to see as many specimens as possible. I tried to look at pretty much every published skull referred to Euoplocephalus, and all of the more recently collected or unpublished skulls that I could find out about. Do you have a skull in your collection that I missed? Let me know, I would love to see it!

Because specimens have been collected from Alberta for a long time, Albertan dinosaurs have wound up in many museums around the world. In order to collect my dataset, I had to see specimens in the collections of the Royal Tyrrell Museum, the Royal Ontario Museum, the Canadian Museum of Nature, the American Museum of Natural History, the Smithsonian, the Natural History Museum in London, and the Museum of the Rockies. It was great fun to visit all of these interesting museums, but it can take a long time to finish a project like this – planning so many trips takes time, arranging for funding for said trips takes time, and museum trips need to be worked around teaching and fieldwork schedules. A tip for any of my aspiring palaeo friends: I am very lucky to be part of a large lab, and one way I was able to cut down costs significantly while traveling was to have people to share my hotel room with. Oftentimes, I would travel with several other Currie Lab members – we would figure out who needed to go to what museums, and coordinate our trips so we went at the same time. It makes a huge difference when you need to go to, say, New York... 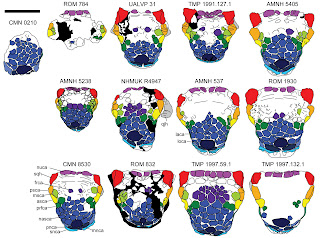 When you compare the Euoplocephalus skulls, there's definitely a lot of variation in the shapes, numbers, and positions of the caputegulae. But there is also a lot of stuff that is pretty similar, or varies only slightly. For example, all of the skulls have a large hexagonal median nasal caputegulum, all of them have a single loreal and all of them have a single lacrimal caputegulum. What are some of the sources of variation? I'm not entirely sure. The number of discrete caputegulae varies a lot, as does how far back on the skull they go before they fade out in the parietal region. Maybe this is just regular variation, or maybe it has to do with ontogenetic changes. 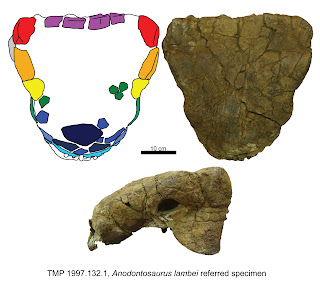 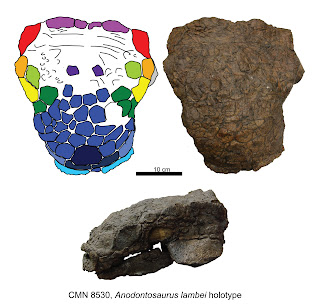 What turned out to be very interesting indeed was the fact that whether or not a specimen had these extra osteoderms seemed to be related to its stratigraphic position! Specimens from the Horseshoe Canyon Formation always had postocular caputegulae and interstitial osteoderms, and almost all specimens from the Dinosaur Park Formation did not. One significant exception is TMP 1997.132.1, which is from relatively high in the Dinosaur Park Formation compared to most of the other specimens.

All together, these features seemed to indicate that "Euoplocephalus" specimens from the Horseshoe Canyon Formation were not the same species as those from the Dinosaur Park Formation. CMN 0210, the holotype of Euoplocephalus, is from the Dinosaur Park Formation. But CMN 8530, the holotype of Anodontosaurus, is from the Horseshoe Canyon Formation. And lo, the taxon that I originally thought I was least likely to resurrect became one of the best supported species in my paper. Anodontosaurus has postocular caputegulae, interstitial osteoderms on the cervical half ring, and a wide, pointy tail club. 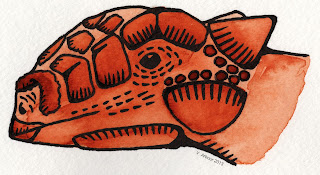 Anodontosaurus was also probably orange. So there.

It's a shame about the name - Anodontosaurus means 'toothless lizard', which isn't really accurate at all. Ankylosaurs have very small teeth, but they are definitely present. The holotype of Anodontosaurus, CMN 8530, does not preserve teeth, but that doesn't mean they weren't there - teeth often fall out after an animal dies. Oh well! Anodontosaurus it is.

Next time: a headless and clubless wonder - how will the mystery of NHMUK R5161 be solved?

Arbour VM, Currie PJ. 2013. Euoplocephalus tutus and the diversity of ankylosaurid dinosaurs in the Late Cretaceous of Alberta, Canada, and Montana, USA. PLOS ONE 8:362421.

Email ThisBlogThis!Share to TwitterShare to FacebookShare to Pinterest
Labels: Alberta, ankylosaurs, Canadian Museum of Nature, Euoplocephalus, know your ankylosaurs, U of A