Today I published a revision of the North American ankylosaurid genus Euoplocephalus. I'd like to take some time to go through some of the major points of the paper over the next few days here, but today I will give a brief introduction to the motivation behind this study.

Euoplocephalus is one of those 'classic' dinosaurs. Named in 1902 (as Stereocephalus, which was preoccupied by...a beetle! of course), it wasn't known from very much material. All that Lambe had was a chunk of the snout/forehead region, and an unusual structure called a cervical half ring. Cervical half rings are totally bizarre structures that seem to be unique to ankylosaurids. They're made of an underlying yoke of fused bone segments, and topped by fused osteoderms like you see on the rest of an ankylosaur's body.

Canadian Museum of Nature 0210, holotype of Euoplocephalus tutus. On the left, the skull chunk. On the right, the first cervical half ring. Images modified from Arbour and Currie (2013).

In the 1970s, Walter Coombs, Jr. undertook a large and important study of the ankylosaurian dinosaurs, which formed the foundation for many subsequent studies of ankylosaur anatomy and systematics. More specimens had been collected by that point, and subtle variations in the skull ornamentation among these specimens led Coombs to conclude that either every specimen must be its own distinct species, or they all represented the same species: Euoplocephalus (because it was named first). That's a pretty reasonable conclusion to have drawn with the available evidence at the time. 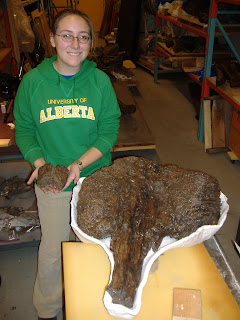 Wow, 2007 was a long time ago. Anyway, here's me at the Royal Ontario Museum holding the smallest tail club referred to Euoplocephalus, ROM 7761, and standing next to the largest, ROM 788. I CT scanned ROM 788 for my finite element analysis research, and you can now see it on display in the ROM's dinosaur gallery.

This was ultimately what led me to pursue my current line of research into ankylosaur systematics and evolution. I hoped that by understanding variation within Euoplocephalus, I would be better able to assess the validity of other ankylosaurid species, and perhaps identify new species. Over the next couple of posts, I'll talk about how I did this study, and what makes a Euoplocephalus a Euoplocephalus. Stay tuned!

The title for this post was shamelessly stolen from Collin Vanburen, because it is hilarious and perfect.

(But you don't have to take my word for it...: Arbour VM, Currie PJ. 2013. Euoplocephalus tutus and the diversity of ankylosaurid dinosaurs from the Late Cretaceous of Alberta, Canada, and Montana, USA. PLOS ONE 8: e62421.)
Posted by Victoria at 12:10 AM